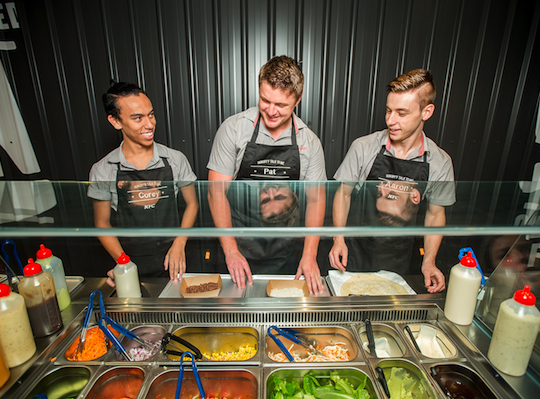 KFC Australia has opened a swanky concept store in Parramatta with a custom menu and modern, urban decor.

It’s the second example in a month of quick-service restaurants dipping their toes in the ‘fast casual’ waters, after McDonald’s opened a concept McCafé called ‘The Corner’, in Sydney.

But while McDonald’s said it has no plans to open more, KFC says it plans to roll out more concept stores across urban Australia if the trial is successful.

The store, on Parramatta’s ‘Eat Street’ at 277B Church Street, is a first for Australia, designed to “meet the evolving expectations of urban, working professionals”.

KFC Australia chief marketing and development officer Nikki Lawson says the company is trialling a smaller menu focused on burgers, wraps and bowls, with the addition of some popular ingredients. “We have reduced the menu to some core favourites and added a few additional items that we believe will hold appeal to this audience. These new items bring the great taste of KFC to life with new ingredients such as red quinoa, jalapeño sauces, basmati rice and corn salsa.”

RELATED: Brand profile: Grill’d founder talks us through how he rescued the burger, and how the brand plans to avoid ‘mainstream’ »

“So while the store has some new taste combinations, it is still distinctly KFC at its heart, emphasising great tasting food, freshly prepared in store to our unique recipes,” Lawson says.

The small restaurant is fitted out with wood highlighting and new imagery that gives it an atmosphere reminiscent of successful gourmet burger chain, Grill’d.

The company is awaiting review of its application for a liquor license to permit dine-in customers to have a beer or cider with their meal. The liquor license is for the concept store only.

Aaron Hedi, the store’s restaurant general manager, says: “I’m excited to see how our customers will respond to the new concept. I grew up in the Parramatta area and have been involved in developing the look and feel of the store. We’ve tried to make it as local as possible, and we’ll be adding more personal touches to the experience so that we’re truly part of the local community.”