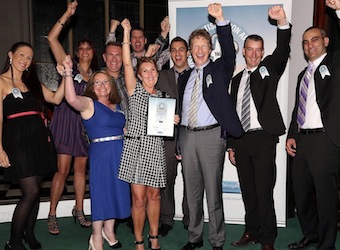 Last night, Roy Morgan Research revealed the winners of its third annual Customer Satisfaction Awards at a gala dinner in Melbourne, recognising the companies that ranked most highly overall in customer satisfaction over the 12 calendar months of 2013.

The research firm’s CEO, Michele Levine, presented 39 awards to businesses that topped their respective fields in customer satisfaction, as judged by more than 50,000 consumers and 22,000 business decision-makers throughout 2013.

Some businesses – including Internode, Apple iPhone, Williams, The Good Guys and JB Hi-Fi – confirmed their reputations for outstanding service with their third consecutive win, while others celebrated for the first time. Southern Phone scored its first Home Phone Provider of the Year award, while Foodland trumped previous two-time winner ALDI for the Supermarket of the Year award.

Scoring similarly emphatic wins, Myer retained the title of Department Store of the Year and Guardian won its second Chemist/Pharmacy of the Year.

« B2B Big Plays: Please explain Ageas, how to light up sales, B2B sponsorships on the riseInfographic: Connecting with the modern Australian mum »