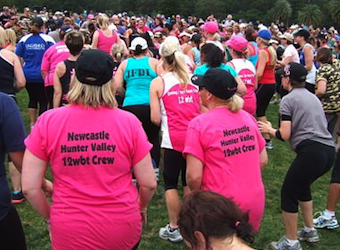 Community and social media manager Larah Kennedy this week told attendees at the Swarm Conference in Melbourne how the company dealt with fans taking the brand into their own hands, both online and offline.

A quick search on Facebook reveals thousands of private groups using the name ’12WBT’. The nature of the program itself is partly to blame for the existence of these unsolicited private groups, as members gain access to the official 12WBT online community for only 12 weeks (a core pillar that the company won’t be changing).

“These guys are super passionate about 12WBT. Not only are these guys coming off our platform, using our brand name and setting up groups, but they’re doing it without our eyeballs. We don’t know what’s going on in there – it’s like the wild west of 12WBT on Facebook,” Kennedy said.

“The first lawyers were very fire and brimstone. They said to us, ‘You need to shut this down… You are in a world of trouble if the ACCC cottons on to this… This is damaging your trademark’.

“They told us the fact that we’re letting these guys use our brand name, if we ever have a serious trademark case, we won’t be able to do anything about it because we’ve got all these cases where we’ve just let our trademark go.”

But one of Kennedy’s main points of advice to community managers at the conference was: “If it doesn’t feel right, get a second opinion”.

“There’s a lot of grey area around social media and legalese. Just because one person tells you to look at it a certain way doesn’t necessarily mean that that’s the way everybody will see it or the way it has to be done,” she said.

It didn’t “feel right” to Kennedy and her team to send cease and desist letters to such massive fans and brand advocates. The second lawyer’s advice seemed far more sensible:

“They told us, ‘Treat these guys like sporting fans’. If you go onto Facebook and you search groups named Hawthorn Hawks, you’ll find a whole bunch of Facebook fan groups. They use the logo, they use the name. Basically they’re like affiliates to the brand, but they’re fan groups.”

12WBT decided to treat their crews in a similar way, with minimum interference, as well as supporting them through the following initiatives:

“They know who we are, they know how to contact us, they come to us when they need us. But this is their space, we’re just happy to help out wherever we can,” Kennedy explained.

“It’s about keeping these core advocates happy, keeping them in the family after the 12 week program is finished.”