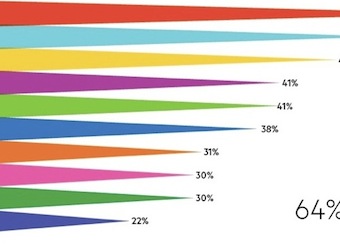 Social media marketing is like putting on a stage show. Give your fans what they want and they’ll love you – they’ll connect with your brand and share word of your prowess. But if you fail to hit the spot, they’ll sling rotten tomatoes your way.

Marketing‘s infographic from the October issue of our magazine looks at the use of social media and what consumers want from brands. With 62% of Australia’s online population a member of at least one social network as of June, the point of critical mass has been reached. However, usage patterns around the country differ slightly, with Twitter use more prolific in NSW and the ACT, and LinkedIn use more pronounced in NSW and Victoria than neighbouring states.

The medium lends itself to some categories better than it does others. Users are most likely to share their views on travel and leisure related industries, with hotels, restaurants, bars and movies the most commonly reviewed topics.

Many consumers refer to social networks as part of the product research process – 67% on an occasional basis and 33% on a weekly basis. On two in five occasions, this research ends in a purchase. Clothing/ fashion is the category most likely to be researched, followed by music and electonics.

Discounts and giveaways continue to be one of the most attractive forms of content, however strong brands or compelling products have no trouble attracting an audience keen to engage in news and imagery.

While more agreed with statements in support of advertising than disagreed, conventional wisdom is solidying around the medium as more suited to social conversations rather than push-based advertising.