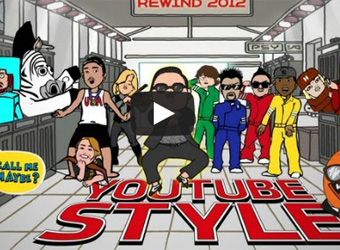 South Korean pop sensation Psy’s ‘Gangnam Style’ dominated the world in 2012, racking up almost a billion views to take the title of most watched YouTube video for the year and in the video-sharing site’s history.

YouTube’s annual rewind, so far only released at a global level (Google is yet to confirm whether an Australian list will be released), also featured a cover of Goyte’s ‘Somebody That I Used To Know’, Red Bull’s Stratos Mission, which saw daredevil Felix Baumgartner freefall from the edge of space, Kony and parenting tips from Facebook.

In a post on the site’s blog, YouTube says, “This year, Korean pop music transcended boundaries and took the world by storm. Cover songs, parodies, and “do-it-yourself” music videos from all genres entertained us in countries near and far. And you participated in conversations at a global scale, uploading videos to share ideas on everything from nonprofit campaigns, to political satire, to new and surprising voices and talents. Plus, all over the world, you tuned in for the most up-to-date news footage of presidential elections, natural disasters and more.”

2. Somebody That I Used to Know – Walk off the Earth (Gotye – Cover)

6. A DRAMATIC SURPRISE ON A QUIET SQUARE

7. WHY YOU ASKING ALL THEM QUESTIONS? #FCHW