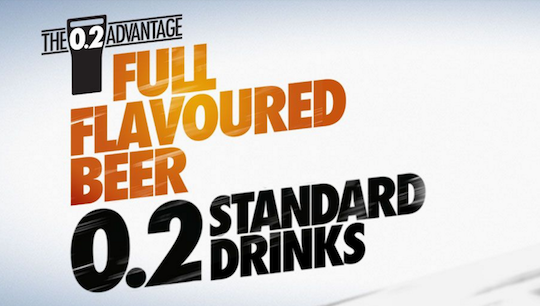 Lion breweries has launched a campaign for its new low-alcohol beer, Hahn Ultra, which is set to bring new interest into the low-alcohol category in Australia.

Released in partnership with Integer, creative for the campaign will focus on the fact that one 330mL bottle contains only 0.2 standard drinks, with the tagline ‘The 0.2 Advantage’.

The beer has an 0.9% alcohol volume, but still aims to deliver full flavour.

Ben Slocombe, Lion marketing director, says, “the 0.2 advantage is that consumers no longer need to compromise, wither on the time they’re able to connect with their mates over an ice-cold beer, or what they want to achieve tomorrow. There’s no need to say cheers with a lemon squash anymore.”

The new beer’s launch is in response to growing global popularity in non or low alcohol beers, with the segment increasing by 34% in the past five years, according to Euromonitor International 2015.

Along with the ‘0.2 Advantage’ tagline, various copy featured in campaign creative include, “Tastes like Friday on a Monday” and, “Tastes like Saturday night on a school night”.

Consumption of low-alcohol beer has remained low in Australia, and “understanding of its benefits have been limited” says Slocombe.

“We hope that with the launch and campaign we will begin to see the dial shift and awareness increase, particularly given how popular mid-strength beers are locally” he says.

“We believe Hahn Ultra is going to bring new interest into the low alcohol category. We are offering more choice to people who are looking to moderate their alcohol consumption, but still want to connect socially and enjoy a great tasting beer,” says Slocombe.

The campaign will run from March through July and will be supported by digital from The White Agency, media from Bohemia, social, PR by Respublica and a sampling campaign.