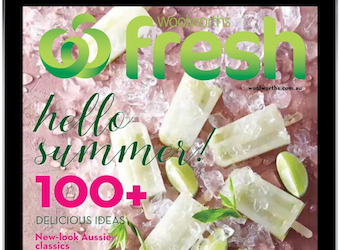 The Australian out-of-home industry increased its net revenue by 10% year-on-year, reaching $602.1 million in 2014.

The industry has been growing for five years now, since recovering from the GFC in 2010.

“People are travelling further each day and spending an average of 14 hours travelling and shopping each week. In light of this, Australians are now likely to see an average of 26 advertising faces each day,” OMA says.

Here are the OOH category totals for 2014:

Woolworths has released the first digital edition of its free customer magazine Fresh, complete with an integrated online shopping cart allowing readers to add ingredients from recipes as they read.

The tablet edition of the January/February Fresh, produced by Newslifemedia, also includes the following features:

Fresh is Australia’s most-read magazine, with 3.2 million readers, ahead of Better Homes and Gardens and The Australian Women’s Weekly.

“The new app builds on our ambition to help our customers save time and money when they shop at Woolworths.”

The first two weeks of 2015 was the strongest on record for cinema, up 18% year-on-year, according to Val Morgan.

Movie-goers spent more than $40 million across each of the first two weeks of 2015 to see films including The Hobbit: The Battle of the Five Armies, The Imitation Game, Penguins of Madagascar, Taken 3, The Water Diviner and Big Hero 6.

The Wall Street Journal is reporting rumours that Twitter is planning to expand its audience available to paid advertisers by selling ads within streams of tweets embedded on other publishers’ websites.

“People familiar with the matter” told WSJ that the company announced its idea at the recent Consumer Electronics Show (CES) in Las Vegas.

The plan, if implemented, would significantly boost the social media company’s revenue.