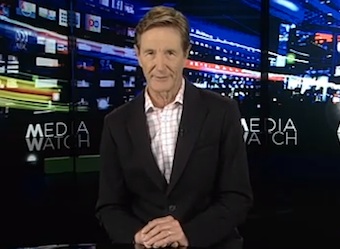 The feud between the ABC’s Media Watch presenter Paul Barry and News Corp continues, with The Australian newspaper today accusing Barry of being ‘obsessed’ with the organisation.

The column, penned by editor of The Australian Media Section, Sharri Markson, accuses Barry of mentioning News Corp’s news­papers in 11 out of 19 segments in seven Media Watch episodes broadcast since he took the reins as host on 3 February this year.

The feud has also spilled over to Twitter with Barry and Markson exchanging heated Tweets over the issue: 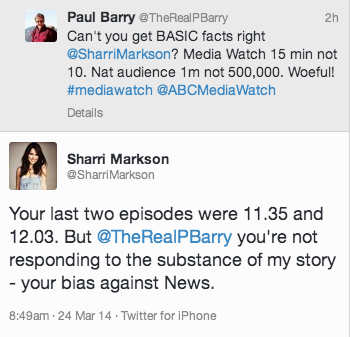 An excerpt from the column:

Funded by the taxpayer, Media Watch is meant to provide impartial analysis of the media industry, examining conflicts of interest, deceit, plagiarism and abuse of power.

But, far from being an impartial host, Barry authored an anti-News Corp book,Breaking News: Sex, Lies and the Murdoch Succession, last year and has so far criticised News Corp’s news­papers in 11 out of 19 segments in seven Media Watch episodes broadcast since he took the reins as host on February 3 this year.

News Corporation is over-represented on the show, the ­remaining segments split between Today Tonight, tabloid television, Nine’s The Today Show, ABC’s reporting of the asylum-seeker burnt-hands fiasco, radio host Derryn Hinch, a story about the Sydney Opera House sinking, Seven Network’s possible payment for an interview with convicted drug-smuggler Schapelle Corby and jailed journalist Peter Greste. Barry, who earns a salary of $191,259, has only briefly scrutinised Fairfax, despite a bitter dispute unfolding between its executive team and major shareholder Gina Rinehart, while on the editorial front, major late-breaking stories are not being published in its newspapers because of new, early deadlines.

Channel 10’s ratings continue to dive after it recorded just 6.2% of Sunday night’s network share (its second lowest of all time) according to figures released by OzTam this morning.

To put that into perspective, Nine enjoyed a network share of 27.6% last night with Seven not far behind with a 25.5% share.

The Australian Financial Review  has been named the most widely read publication among the “Business Elite” and has the highest level of engagement with readers, according to the annual Business Elite survey from research firm Ipsos MediaCT.

Fairfax Media sales director, business Michael Grenenger said: “The Ipsos study confirms that The Australian Financial Review is the most trusted medium among the Business Elite. It also demonstrates the strength of the entire Fairfax Business Network in reaching this valuable and influential audience.”

Attracting and retaining suitable employees and industrial relations issues are the top two concerns among the Business Elite.

“The Business Elite anticipate that stability in global finance and the Australian federal government will have the most positive impact on their business, although they are still concerned about the negative impact of Australia’s high cost base and fragile consumer confidence,” Ipsos Media CT managing director Simon Wake said in a statement.

The Business Elite survey consisted of 1600 mail or online interviews with business executives across Australia. All interviews were either C-suite or department heads in companies with 20-99 employees (finance and business services) or more than 100 employees in all other private sector industries.