Microsoft’s acquisition of LinkedIn is all about the data

Microsoft’s acquisition of LinkedIn is all about the data 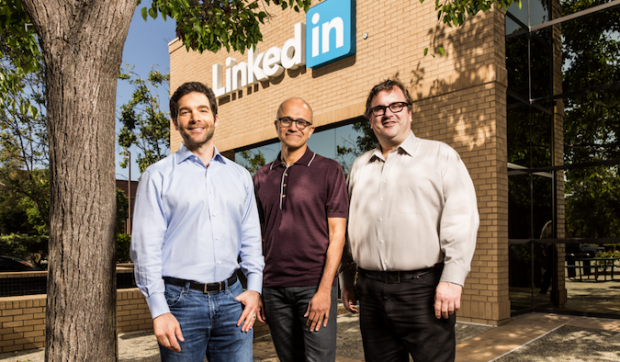 Microsoft and LinkedIn have entered into an agreement which will see Microsoft acquire LinkedIn for US $26.2 billion in a move that will combine two complementary data sets.

Microsoft and LinkedIn have announced an agreement which will see Microsoft acquire LinkedIn for US$196 a share, totalling US$26.2 billion.

Jeff Wiener, CEO of LinkedIn (above, left), will remain in charge at the social network, and will report to Satya Nadella, CEO of Microsoft (above, centre).

LinkedIn will retain management of the brand, and its independence and culture in the transaction, which is expected to close at the end of the 2016 calendar year.

Controlling shareholder of LinkedIn, Reid Hoffman (above, right), who’s chairman and co-founder, is supportive of the deal.

But the acquisition may undermine LinkedIn’s position as the most popular professional social network, according to one analyst. It does present an excellent opportunity for Microsoft, as long as it acts quickly.

“Although the deal, should it go through, helps Microsoft to strengthen its social networking services and professional content, there will be LinkedIn users that are not keen to become sucked into the Microsoft ecosystem as part of their social collaboration activities,” says Dan Bieler, principal analyst at Forrester.

“It took Microsoft five years to define its strategy for Skype. This slow response to sort out Skype’s place in the Microsoft family slowed down Skype’s momentum significantly.

“By the time the new Skype strategy was announced, most of the hardcore Skype users had migrated away towards other social collaboration platforms,” he says.

The clearest implication of the businesses combining is to merge their data sets. Importantly, the data sets have little overlap. The various Microsoft Office products are rich in contacts, messages, calendar and data relating to other productivity purposes. Combining that with LinkedIn’s data on colleagues, acquaintances, education and jobs creates a formidable pool of data for Microsoft’s advertising products and services.

Here are the two CEOs, Nadella and Weiner, discussing the acquisition:

Purchase a subscription for the latest in social media and marketing technology.