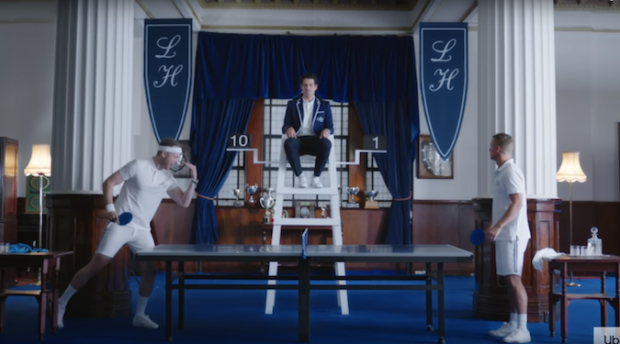 The spot arriving via Sydney’s Special Group sees Blake facing off against Hewitt in a heated game of table tennis, with Lee officiating the match. Blake is leading 10 to nothing against the two-time Grand Slam winner as he taunts Hewitt with his own signature “C’mon” gesture.

“We’re professionals when it comes to not moving from the couch and ordering dinner, so it makes sense that we’ve teamed up with Uber Eats,” say Blake and Lee.

“Our favourite thing about food delivery is that we can pass it off as something we’ve cooked personally if our partners arrive home after the delivery.”

Blake, Lee and Hewitt’s commercial is the third in Uber Eats’ campaign, launched in 2017 as its first for the Australian market. Earlier this month, Australian actresses Rebel Wilson and Ruby Rose and news-media personalities Lee Lin Chin and Ray Martin debuted the campaign for 2018.

“Being a regular user of Uber Eats, I was extremely happy being chosen to be part of their new campaign,” says Hewitt.

“I really enjoyed last year’s and to have a chance to be part of the new one, especially working with Hamish and Andy, I knew it would be fun. And it was!”

The campaign is set for release over television and digital with support over OOH, radio, direct and PR, as well as a host of live social media activations and media partnerships.

BY ON 29 October 2018
Josh Loh is assistant editor at MarketingMag.com.au