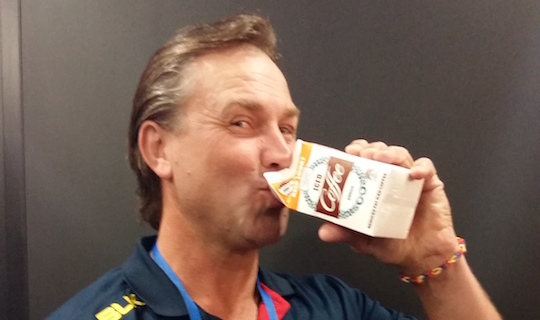 the future packaging of the flavoured milk beverage.

The campaign, which began in June, joined lighthearted, mock election campaigns from Hungry Jack’s, KitKat and others which leveraged the election fever the nation was experiencing in the lead up to 2 July.

With 60% of the vote, the people of South Australia took an ‘if it ain’t broke, don’t fix it’ stance in voting for the original packaging instead of the other three candidates which had altered brand logos.

Voters had the opportunity to choose between The Wildcard, The Real McCoy, The Straight Shooter, or remain with the original packaging.

The election win was announced on Saturday night  at Adelaide oval for the Adelaide Crows versus Collingwood Magpies football match.

Crows football legend Tony Modra (pictured at top), was the ambassador for the original design, and claimed victory on its behalf. Modra joined sports commentator and squash legend Chris Dittmar, radio personality Amanda Blair and The Biggest Loser contestant Andrew ‘Cosi’ Costello as South Australian celebrities for the campaign, each of whom represented one of the design candidates.

Farmers Union Iced Coffee was launched as an idea by a co-operative of South Australian Dairy Farmers to boost milk sales. The brand has since achieved icon status in South Australia and nationwide.

Today the Farmers Union Iced Coffee brand is part of the Lion Dairy and Drinks portfolio.

Purchase a subscription to Marketing magazine for the latest in opinion, insight and case studies on Australian brands and campaigns