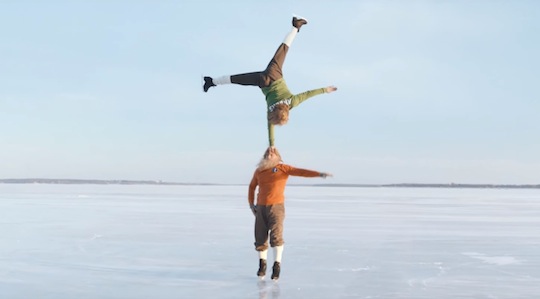 Nothing says Sweden like two bearded men gracefully skating across the picturesque frozen Torneträsk Lake, while their coach Jarmo watches on and delivers an angelic version of traditional Swedish folk song ‘The Reindeer Herder’s Joik’.

The ad channels Will Ferrell’s popular comedy, Blades of Glory, and with good reason. The choreography crew behind the film were on set to help with the routine, while Sarah Weatherburn, famed for being the creator of the wigs for the Harry Potter films, was responsible for the skaters’ unique look.

“The vivid blue skies and the frozen lake reinforce a crisp refreshing feeling and while their routine is clearly unconventional, it’s undeniably ‘beautifully Swedish’ and has a touch of quirky humour that Scandinavians are famous for,” says Langford.

Chilli Marketing’s Kieron Barton said the end result stems from a shift of focus from the staid approach often taken by cider brands in marketing.

“For us the cider category has become a little predictable on TV and we felt it needed something to invigorate it. This shifts the focus from a somewhat staid approach for cider brands with apples and pears falling from trees, to a much more emotional one.  The end result is an epic sensory overload with a soundtrack that is both haunting and euphoric. The whole thing leaves you wanting more.

The campaign is made up of the TVC and 12 additional edits, which will makeup part of the campaign to be run through social media platforms, primarily Facebook and Instagram.

Langford said the move to focus on the social space is deigned to engage with the brand’s core audience, which is primarily Millenials who spend much of their time on social.

“In true Rekorderlig style, we’ve been bold enough to deliver a breathtaking creative and invest this primarily into social. We believe that our core audience is more likely to engage with the brand and our amazing content in this space,” Langford says.