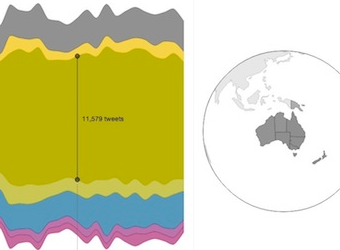 Researchers in Australia have developed a new tool that tracks the real time mood of Twitter users from around the world.

Researchers from the CSIRO and mental health research institute Black Dog, have developed WeFeel, an application that analyses sets of words and places them on a mood map to track the feelings of Twitter users.

Around 600 specific words in the English language that denote various emotions, including joy, surprise, anger and sadness, are tracked in a global stream of 27 million daily tweets.

Researchers say they can track emotional responses to events and see the shift in mood according to factors such as weather, natural disasters or political announcements.

Of course, the algorithm is not entirely accurate yet, given the nuances of language. For one, it doesn’t factor in more subtle uses of language, so things like sarcasm are lost. Second, international data is difficult represent accurately if people tweet in other languages. This initial study examined English tweets only, with the goal being to determine whether tweets can be a valid source of mood data for a population.

Should the data tracker prove accurate in the long run, researchers hope it will aid the work of public health programs.

In a press release, Professor Helen Christensen, executive director of the Black Dog Institute said the tool could be an important step forward for mental health. “We will have the unique opportunity to monitor the emotional state of people across different geographical areas and ultimately predict when and where potentially life-saving services are required. The power of this information cannot be underestimated.”

The tool is open to public use at wefeel.csiro.au, and looks like this: 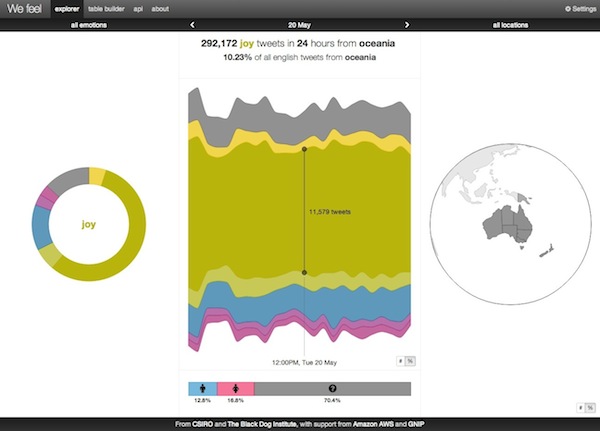