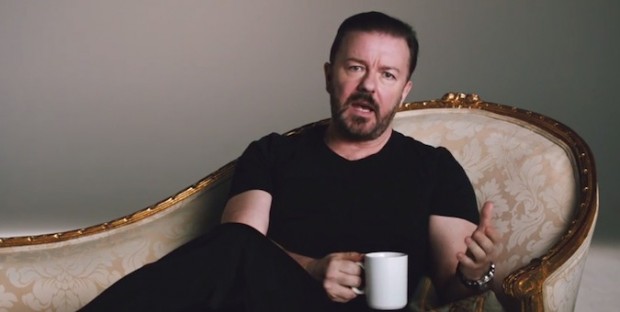 Ricky Gervais has “never heard of” Optus but he’s starring in ads promoting its Netflix partnership because they paid him “a shedload of cash” – or so he says in the ironic anti-advert released in-line with Netflix’ Australia launch today.

Gervais took control of the scripts for both video spots on the Optus-Netflix partnership in a bold move that fits with the telco brand’s current cheeky positioning targeting youth.

“Key to the strategy was to approach this through a lens of entertainment and let Ricky interpret the message in his own style.”

In the first spot, Gervais brings his unique style of comedy to the Optus message, dropping jokes between delivering the core message: that Optus’ new and returning customers can receive free access to Netflix for six months.

The second spot is far less conventional, starring Gervais in full contemptuous mode as he delivers “quite possibly the laziest brand lines of all time”, Optus says.

“There is no more appropriate talent in the world than Ricky Gervais to promote our partnership with Netflix,” Phipson says.

“The result is content that will drive social media conversation whilst delivering our core message of Optus and Netflix, which has become part of Ricky Gervais unique comedy.”

“He was right, we did use it,” the brand’s YouTube listing for this video says.

Optus has signed the deal with Netflix to provide six-month free access vouchers to customers who sign up between 24 March and 5 July to:

Netflix announced its pricing earlier this week, which commentators are calling fair: the three pricing tiers, billed monthly, are $8.99, $11.99 and $14.99. The pricing is roughly comparable to local competitors Stan and Presto.

This means Optus customers will save just over $50 by redeeming the six month deal.

But mobile customers will need to watch their data usage when they sign onto Netflix through Optus. Optus’ website says:

“Netflix data usage is billed in the same way as normal data usage and if you go over your monthly data allowance on your mobile plan you’ll be charged for it as per your plan.”

Optus home broadband customers from 17 April will be able to stream unlimited Netflix content when it is zero-rated for compatible modems.

Netflix is available through Fetch TV Generation 2 set top boxes; anyone with a Generation 1 version will need to upgrade for $135.