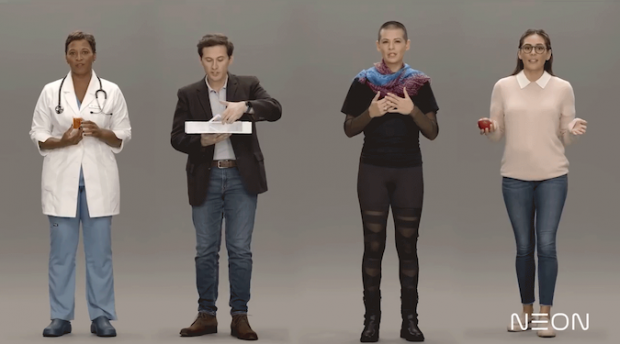 Samsung subsidiary Neon wants to fill screens of the future with artificial people – not robots that look like people, but robots that think they are.

The annual Las Vegas conference always delivers a bit of a stir in the tech world to start off the year. More often than not, it’s seen as an opportunity to flaunt technology companies’ more outrageous ideas and products, many of which never see the light of day.

TV screens are getting larger and thinner, chips are getting smaller and cheaper and phones are getting bendier. But apart from the predictable advancements that mostly adhere to Moore’s law (but are exciting nevertheless) – one showcase from this year’s CES poses an interesting thought experiment, at least, for our near future.

Neon, a product of the Samsung Technology and Advancement Research Labs (aka STAR Labs), has been shrouded in mystery since the few things we know about it were revealed through copyright documents and ominous tweets.

Following its first proper reveal to the public at CES, there are still far more questions than answers.

In short, Neon produces photorealistic digital ‘artificial humans’. While it’s tempting to assume ‘Neons’ – as the digital humans have been dubbed – to be an upgrade to chatbots or virtual assistants, the company asserts that they are anything but.

“Neons are more like us, an independent but virtual living being, who can show emotions and learn from experiences,” the company claims.

“Unlike AI assistants, Neons do not know it all, and they are not an interface to the internet to ask for weather updates or to play your favourite music.”

So while you may not be able to ask your Neon about traffic on your commute to work or the weather in Shanghai, it may be able to console your broken heart or coach you on your singing.

“There are millions of species on our planet, and we hope to add one more,” Pranav Mistry, Neon CEO and head of STAR Labs, said in a press release. “Neons will be our friends, collaborators and companions, continually learning, evolving and forming memories from their interactions.”

Though many are already drawing Black Mirror comparisons – which is becoming disturbingly easy in this age of tech – Neon sees a future where its digital humans star in our newsrooms, receptions and even films.

It might be a stretch to think the general population would be receptive to pseudo-sentient digital companions, though one could certainly point to the proven success of computer-generated influencers as a gateway.

Y’all ever seen a robot ride a horse? Beephaw. 🐎 Maaaybe there’s a special something inside the mag, too. 💘💘💘 (Thank you, @notion! And thank you to my co-cover model for not outshining me TOO much.)

Update 13/1: Neon has since revealed that the demonstration videos shown at CES and in its promotional videos (shown above) are “fictionalised and simulated for illustrative purposes only.” This means the market is yet to actually see anything of substance from Neon. Here at Marketing, we’re simply considering it an early April Fool’s joke.

BY ON 8 January 2020
Josh Loh is assistant editor at MarketingMag.com.au