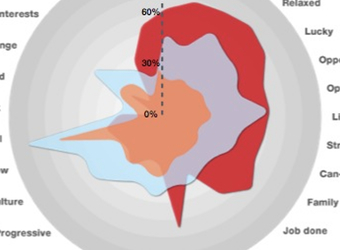 SBS has presented findings of a study it commissioned last year, titled ‘Who Do We Think We Are? In search of ourselves: Understanding the Australian identity’, which asked Australians from across the country key questions about how they believe the nation has changed in the past 20 years, what it means to be Australian today, and considers future implications for businesses and brands.

The research was conducted by Pollinate, and draws on data from a nationally representative sample of more than 1000 people across age, gender, location and language spoken at home.

Perhaps the one thing Australians know for sure, the study suggests, is that the vast majority of people understand and accept that Australia’s future will be more multicultural.

According to the study, Australians see the nation as having three varying categories of people:

While Australians are proud of the successes forged by their immigrant nation, they are confronted with a daily contradiction between how they see themselves represented by the media and how they perceive they are in day-to-day life. They think the media portrays Australians as hardworking, clever, egalitarian, tough and never in possession of the things they perceive they need.

The individual Australian is, perhaps, not actually as hard-working as they may think and is suspicious of academia and intelligence, threatened by rapidly increasing cultural complexity, enjoys comforts and is more wealthy than they believe they are.

SBS director of sales Andrew Cook says the research will allow SBS Media to provide marketers and agencies with additional help in understanding what Australians think about where Australia is headed. “We know Australia has changed compared to 20 years ago and this research can help with strategic insights when it comes to Australia’s mindset,” he says.

Below is a key chart from the research presented at Vivid Ideas in Sydney this week by Pollinate’s Howard Parry-Husbands (who also contributes to this website), showing the shift in perceptions of Australians from 20 years ago to today, and projecting what will happen over the next 20 years.