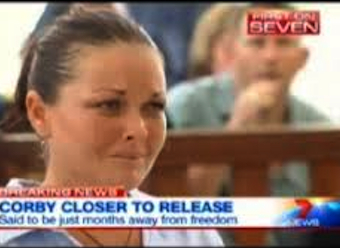 Channel Seven is believed to have secured a multi-faceted media deal with convicted drug smuggler Schapelle Corby. The deal which is rumoured to be worth around $AU3 million will include exclusive interviews with the channel’s Sunday Night program as well as features in Pacific Magazine’s New Idea magazine which is also part of the Seven West Media Group.

News Corp is reporting that Corby’s mother, Rosleigh has allowed Seven’s cameras to film her reaction from Brisbane as she watched her daughter walk free from the Bali prison she has occupied for the last nine years.

Corby emerged from Kerobokan Prison today with her face completely hidden in scarves and wore a checked black and white hat which is thought to maximise the impact of any media deal for TV or magazines.

Questions have been raised around how much Corby should be able to profit from her time in jail, with Prime Minister Tony Abbott saying on Thursday, “crime should not pay” in the case of Corby.

Interestingly, the diplomatic row currently brewing between Australia and Indonesia could see Corby free to earn millions from selling her story without being affected by proceeds of crime legislation.

However, current ‘suspension of cooperation’ may mean Indonesia would not help if Australian Federal Police sought its help forfeiting or freezing any money paid to an Indonesian account held in Corby’s name meaning she could run into trouble transferring any profits she makes from her story back to Australia, where it could be seized under the Proceeds of Crime Act.