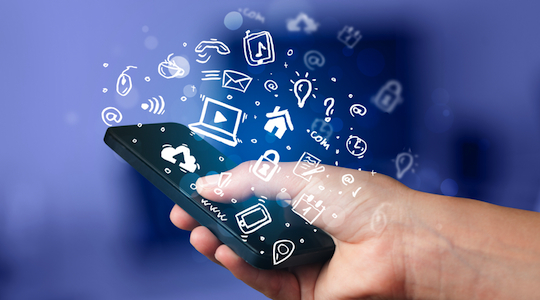 Mary Meeker’s annual Internet Trends presentation covers everything from growing online engagement in the developing world to data storage, electric cars, voice recognition and the re-imagining of human-computer interfaces. Here we cover some of the top trends in advertising and branding from the 2016 report.

One trend which exploded between 2014 and ‘15 was video viewing on social media, primarily on Facebook, with one average user-shared video view per day in Q3 2014, and eight in Q3 2015.

Snapchat’s daily video views also experienced rapid growth, with two per day in Q1, 2015, and 10 in Q1 this year.

Between 2013 and 2015, all major messenger platforms experienced growth:

With the emergence of chat bots likely to draw more and more users to messaging apps, Meeker predicts they will increasingly become a second home screen, where consumers can engage with all their required brands and services via chat and inboxes, perhaps redefining or replacing the need for individual apps displayed on a home screen.

Average global app use per user:

“With the report pointing to 25% of consumer time being spend on mobile, it’s obvious this is no longer a medium that businesses can ignore. Having said that… businesses shouldn’t be jumping to create a mobile presence for the sake of being on mobile either,” says Logan Merrick, co-founder and director, Buzinga App Development. 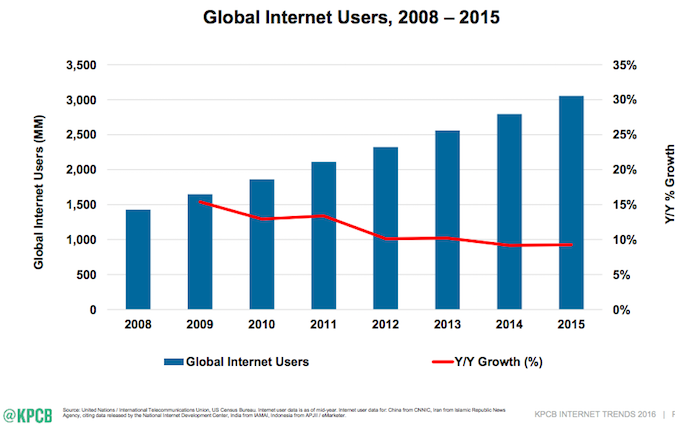 Global growth in smartphone usage is beginning to slow, perhaps a sign of its near-universal adoption, with its largest market, Asia-Pacific, growing 23% from 2014-’15, compared to 35% from 2013-’14.

“We can no longer say that social and mobile are ‘taking off’ and therefore we all need to be on social and mobile – consumers want to be treated as individuals with individual needs that switch and shift throughout their day, career, and personal activities,” says Robin Marchant, global marketing director, Squiz.

“The digital revolution as a stand alone discipline is clearly behind us. The user experience of today and tomorrow demands and integrated, multidisciplinary approach. While some businesses are still struggling to align their marketing departments and break free of brand versus digital versus direct silos, those at the helm are truly embracing a customer centric paradigm,” says Irina Hayward, head of digital and CRM strategy, BMF.

While the field is growing, online ads are proving ineffective in many ways – globally according to Unruly:

Android represented 81% of smartphone unit shipments in 2015, compared with iOS, which held 16% of that market.

Meeker estimates a further 7% growth year-on-year for Android and a drop of 11% for iOS.

This represents a huge jump for Android, which, as recently as 2009, only made up 4% of unit shipments, compared to iOS which made up for 14% at that time.

As per Google, voice recognition has jumped since 2010, where it stood at 70% accuracy, to 90% accuracy in 2016. This equates to one million words recognised by machine in 2010 to between five and ten million today.

Voice interfaces, if implemented properly once technology catches up, offer a faster (humans can speak faster than they type), easier (hands free, instant) mode of computer engagement. For Andrew Ng, chief scientist at Baidu it’s a lot closer than we might think.

“As speech recognition goes from, say 95% to 99%, all of us in the room will go from barely using it today, to using it all the time. Most people underestimate the difference between 95% and 99% accuracy  – 99% is a game changer.

“No one wants to wait 10 seconds for a response. Accuracy, followed by latency, are the two key metrics for a production speech system,” says Ng.

In May 2016, one-in-five searches on mobile apps in USA are voice searches. Andrew Ng predicts at least 50% of all searches will be made through images or speech.