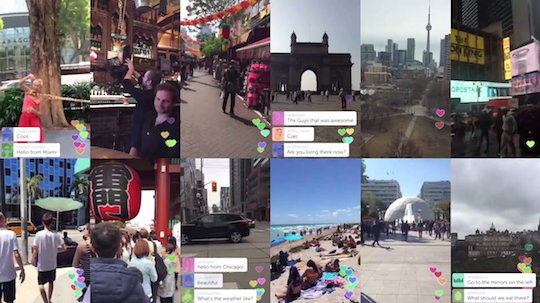 Periscope launched in late March as Twitter’s new live streaming app. Twitter announced today that Periscope had over one million sign-ups in its first 10 days.

The campaign involved a 24-hour broadcast with 19 travel bloggers and Skyscanner team-members from around the world. Each shared travel tips and knowledge of their country to people tuning into the broadcast through the app. Melbourne blogger Bitten by the Travel Bug and Canberra blogger Travel and Beyond were part of the broadcast.

Skyscanner reached 1.6 million users with the campaign and had over 23,000 viewers watch the broadcast. The hashtag #24hPeriscope became a trending topic after generating more than a thousand tweets. Skyscanner were pleased with the response to the campaign, saying it exceeded its own expectations.

“We’re always looking to find new ways in which we can share inspiration with travellers around the world and we were immediately drawn to the possibilities offered by the Periscope app when it first launched. We wanted to see whether the app could bring destinations to life through the eyes of local travel experts through a series of live broadcasts in 22 cities around the world over 24 hours.”

“We certainly think there is a demand for live video streaming to bring destinations to life in real-time and make finding inspiration on where to travel more immediate as well as fun and are looking at ways we can explore this new channel further,” Poullain said.

The app allows users to broadcast live to followers. Viewers are able to interact by sending the broadcaster messages and ‘hearts’. The app is currently available on iOS devices.

Since its launch, users have been sharing fridge tours, live performances and even asking for fashion advice on the app.

But Periscope is seriously so fun for people like me. I LOVE getting glimpses into other people’s lives.

Just tried #Periscope for the first time. Someone was giving a live tour of their fridge. I’m not making this up. Gripping stuff. — Gaz Weetman (@GazWeetman) March 28, 2015

Might need your help picking out a dress for a movie premiere tonight! I’ll be on #Periscope soon!

Periscope has also been used to broadcast from places such as Baltimore and Ferguson during riots and protests.

The future is NOW! I am “attending” a rally in Baltimore LIVE via Periscope (@VeryWhiteGuy). Much different view than the media is showing.

Some users have criticised periscope for having too many notifications and being difficult to sift through live feeds. Others still prefer Periscope’s rival live streaming app, Meerkat.

@ChelseaKrost I like #Periscope, but not a consistent stream of content (combined with way too many notifications!) #MillennialTalk