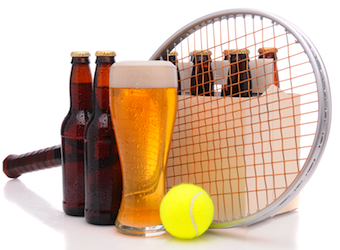 Athletes sponsored by alcohol brands show greater problem drinking behaviour than those without alcohol sponsorship, according to a study by Melbourne’s Monash University and University of Manchester.

The study, which looked at university sports teams in the UK, concluded by recommending the introduction of policies to reduce or ban alcohol companies from sponsoring athletes in the interest of health.

The study found that:

The researchers surveyed more than 2000 people from universities in the North West, Midlands, London, and Southern regions of England, most of whom played community sport. About a third of the participants were sponsored by an alcohol-related brand such as a brewer or a pub.

The study found that alcohol consumption was high in athletes overall but the World Health Organisation’s Alcohol Use Disorders Identification Test found 50% of those receiving alcohol sponsorship were in need of counselling, compared with 39 per cent of non-sponsored athletes.

The hazardous drinking was higher in alcohol-sponsored athletes even after accounting for factors such as type of sport, age, gender, disposable income and region.

“I think most people would agree that sport is an important marketing tool for the alcohol, gambling, and fast foods industries, in much the same way it was for tobacco.

“Our study raises the question of whether sports that have such sponsorships and advertising might promote poorer health and social outcomes.”

For example, CUB’s Carlton Draught is an AFL major partner, Victoria Bitter is the official beer of the NRL and Cricket Australia, and Carlton Mid is the naming partner of the cricket ODI series; “Carlton Mid Series”.

“We think all of those we partner with can demonstrate a strong track record in promoting a responsible attitude to alcohol,” Howard said.

“There would be few who would disagree that crowd behaviour at games has changed dramatically over the last 20 years – ‘yobbos’ are no longer tolerated. We have supported this move by ensuring that we market our beer responsibly and make light and mid-strength beer available at grounds around Australia for sports fans to enjoy.”

She disagreed with the study’s suggestion to ban alcohol sponsorship, saying sensible, targeted steps should minimise excessive consumption, “not blanket policies such as advertising and sponsorship bans that affect the vast majority of consumers at a sporting or entertainment event that simply want to enjoy a beer”.

Marketing also contacted Pernod Ricard and Lion Australia but neither returned our request for comment by time of publishing.