The demanding expectations of online Australians translate to offline impatience

The demanding expectations of online Australians translate to offline impatience 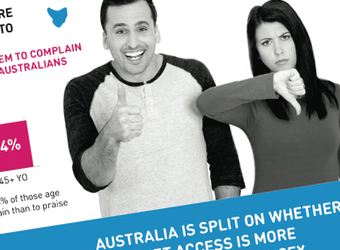 Australians are demanding more from businesses online and are more likely to complain if their needs aren’t met than users in other countries, according to new data released today by enterprise social media software vendor Lithium Technologies. Customer expectations are increasing not only online but at real-world touch points, as well.

The global study highlights that Australia is home to the most demanding internet customers (alongside Germany). “We’re living in an age of extreme expectations,” says Katy Keim, CMO of Lithium Technologies, which commissioned the study from Harris Poll.

Conducted in May 2014 of more than 1000 Australian online adults, the survey found that 91% of Australians use an online source to research major purchases and over two thirds (67%) use two or more online sources. The Australian poll forms part of a global study covering the UK, France, Germany, the US and Australia that sought to shed light on the impact of the internet on people’s preferences and behaviour, both online and offline.

Australian internet users were found to be significantly less patient than Americans: 72% of Australians expect a same day response to their online request, compared to 66% of people in the US.

Keim says Australian businesses are world leaders in providing innovative online customer service and engagement initiatives. It’s hard to say whether Australians have developed demanding expectations of brands online because of this, or vice versa, but Keim tells Marketing that, either way, it’s affecting the expectations of consumers not only in the online world but in the offline world, too.

She says Australians are becoming more impatient across the board: “And apparently people in Queensland are very impatient, they were the highest… we were having a laugh about it with the Australian team because they’re supposed to be so laid back but they were expecting the response fastest.”

Lithium’s research also found that Australians are also more vocal with their dissatisfaction, with  46% saying they’re more likely to go online with complaints than praise, compared to 39% of their American counterparts.

Digital natives were identified as whinging more than those in the over-45 age group, with 58% of Australians aged 25-34 saying they voice complaints rather than compliments online, versus 34% of people over 45 years old.

Finally, 64% of Australians said they would call a toll free number for customer service issues as a last resort.