The Workforce Activism Spectrum: infographic, including pro tips for dealing with detractors

The Workforce Activism Spectrum: infographic, including pro tips for dealing with detractors 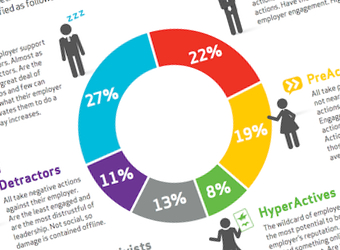 Employee activists draw visibility to their workplace, defend their employers from criticism and act as advocates, both online and off. One in five employees (21%) is estimated to be an employee activist, and another 33% have high potential to be employee activists. As the movement grows at an increasing speed, employers have an enormous opportunity to engage and capitalise on these powerful advocates, or risk missing out on an important group of supporters and, at worst, fail to curtail detractors who have the potential to upend company reputations.

“The employee activist movement should not be underestimated,” said Micho Spring, Weber Shandwick’s global corporate practice chair. “Identifying and activating employees willing to rise to levels of extraordinary support for their organisations will certainly be an important priority for CEOs.”

Weber Shandwick partnered with KRC Research to conduct the study, titled, ‘Employees Rising: Seizing the Opportunity in Employee Activism,’ through an online survey of 2300 employees covering 15 markets worldwide, the study explores the employee activist movement to help organisations understand what it takes to catch the rising tide of employee activism.

“These findings are especially relevant for employers across Asia Pacific. Employees in this region are particularly passionate and will actively share their point of view. We know from our conversations with clients that employee engagement is top of their priority lists and building on employee activism is going to be a new way forward,” said Tyler Kim, head of corporate and crisis, Asia Pacific.

As business leaders know, the impact of social media on an employer’s reputation is now an everyday reality. What some employers don’t fully realise is how critical social media is to employee engagement and how it fuels employee activism. Here are some eye-opening facts from employees in the study:

Some employers have joined the movement

Unrest in the workforce

To understand the roots of this movement, it is important to recognise the challenges facing employees today. There is significant upheaval in the workforce due to: