The worst error in business strategy according to Professor Michael Porter

The worst error in business strategy according to Professor Michael Porter 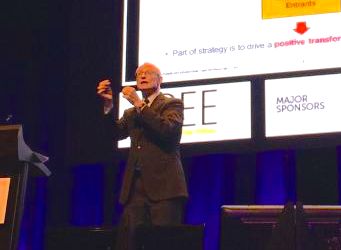 The worst mistake in strategy is to compete with rivals on the same dimensions, Professor Michael Porter told the World Business Forum in Sydney this morning. The man who’s made strategy his life work says many businesses still get confused around the definition of the concept, and that even trying to be ‘the best’ means a business is starting in the wrong place strategically.

Porter needs very little introduction, his ‘five forces’ are in every marketing and business textbook, and Fortune has named him the most influential business thinker of all time. He spoke on business strategy, which he says is where competitive advantage is almost always won and lost. (Not to be confused with corporate strategy, which is how business units are tied together.)

That’s exactly the wrong place to start, he said. “If you think about strategy this way, where does that lead you? That leads you to a race to one ideal way of competing, and the problem with that is if there is only one way of competing and everybody has to race to the same place, it’s not going to be pretty.

“Even more importantly, what we found in industry after industry is that there is no best way to compete. There are multiple ways to compete, depending on whose needs you’re actually trying to serve. We all know it’s impossible to meet every need of every customer uniquely well. That’s impossible. There’s no one way to deliver value.

Strategy is about being unique. That’s ultimately what all successful companies are able to achieve for some period of time.

“There’s a lot of use of the word ‘strategy’ that actually gets in the way of real strategy.
Professor Porter noted certain things as being wrongly used in place of real strategy, major examples being goals, such as ‘to be the best’, and particular actions, such as ‘international expansion.’

While expanding internationally might be the right course of action, it’s not a strategy, Professor Porter said. “Strategy is the set of choices you make which collectively define your position. It’s putting those choices together, not the individual actions, that constitute a real strategy.

“Start reading annual reports and CEO letters, and you’re going to see a lot of CEOs say ‘We are the best bank.’ You’ll smile the next time you read a CEO letter like that. That’s not going to be a very successful organisation.”

For fans of the Professor, here’s a snap of the man and his five forces taken by Angus Beattie:

Porter and his 5 forces on main stage http://t.co/0ybi4RKq53