David Beckham is in town, but it’s not only hype surrounding the visiting superstar and his LA Galaxy entourage – there’s data, and it suggests sponsorship of soccer should be increasingly more attractive to Australian brands.

Roy Morgan Research has released figures showing that 4.22 million Aussies, or 23% of the population over 14 years old, now watch soccer on television. This represents a 10% increase in the number of people watching soccer on television in Australia over the last five years.

Two thirds of these viewers are men, which means 31% of Australian males aged 14 or over are watching soccer on television.

The data includes any soccer televised here, with the FIFA World Cup being most popular, enjoying a regular audience of 3.7 million when it’s held every four years. Ranking second is the English Premier League, with 1.74 million saying they almost always or occasionally watch matches. 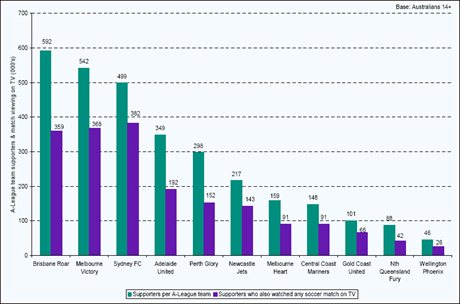 George Pesutto, media industry director, Roy Morgan Research, says the exhibition match held this week between the LA Galaxy and Melbourne Victory will bring a spike of interest in the sport, as well as an opportunity for the A-League to connect with a wider audience: “With international players such as England’s David Beckham, Ireland’s Robbie Keane and Team USA’s Landon Donovan lining up against a popular A-League team that includes Australia’s Harry Kewell and Archie Thompson, the high profile Melbourne Victory-LA Galaxy match is a real opportunity for A-League football to connect with a much larger potential fan base.”

Homepage image courtesy of Calebrw at en.wikipedia [CC-BY-SA-3.0 or GFDL], via Wikimedia Commons