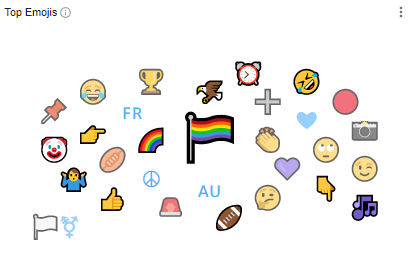 When NRL team the Manly Warringah Sea Eagles presented a limited-edition pride jersey last week, the club aimed to celebrate diversity and inclusion on the field. It could have been a great initiative for the club’s reputation. Instead, the Sea Eagles ended up in the news for the wrong reasons.

Manly coach Des Hasler ended up publicly apologising to the LGBTQIA+ community for the incident. The club also apologised to the players who were not consulted in the club’s decision to wear the jersey.

“Our intent was to be caring and compassionate towards all diverse groups who face inclusion issues daily,” Hasler said at the press conference.

“However, instead of enhancing tolerance and acceptance, we may have hindered this.”

A third apology was extended to the whole of the NRL for the negative news.

Social analytics platform Meltwater sourced and analysed some interesting data on how a PR move, intended to be positive, has backfired.

In the 30 days prior to the controversy, social media sentiment towards the club was mostly neutral. By the end of the week, 29 percent of the sentiment became negative. Only 13 percent of it was positive.

There were 3000 posts shared from a mix of people condemning the players for their ‘ignorance’.

Conversely, 2000 posts focused on the club’s decision not to consult with the players first.

The story also earned some international attention. Over 1500 articles were published about the incident by US media outlets last week, according to Meltwater. Most notably, a Newsmax piece reporting the events was shared on Facebook and Twitter 25,000 times.

The Shrine of Remembrance cancels its pride display

In similar news, a few days later, Victoria’s Shrine of Remembrance cancelled plans to illuminate the building in rainbow colours after a public backlash.

The display was set to coincide with the opening of a new exhibition Defending with Pride: Stories of LGBTQ+ Service. The exhibition is the first of its kind for an Australian war memorial.

“It has been a long and often difficult journey for LGBTQ+ people to be recognised, accepted and celebrated for their service,” the Shrine’s website reads.

Members of the public opposed to the display directed threats and abuse at Shrine staff. The ABC also reported plans for a protest against the lights were circulating on social media. So the Shrine made the call to cancel the lights to minimise harm.

“We have seen something of what members of the LGBTIQ+ community experience every day. It is hateful,” said the Shrine of Remembrance’s CEO, Dean Lee, in an announcement.

A representative from the RSL, a self-described conservative organisation, later told The Age that the light display was inappropriate and that it was not consulted in the original plans.

How the response to the Shrine differed

The Shrine’s pride controversy played out a little differently from that of the Sea Eagles, as did the subsequent response online.

The majority of the commentary said pulling the Shrine display was the wrong move. This differs from the divisive response to the Sea Eagles. Here people also blamed the club for not consulting the team ahead of the decision.

In the case of the Shrine, there was an even larger proportion of negative sentiment on social media, at 34 percent. This was mainly from people calling the public backlash against the lights a ‘chilling attack’ on the ‘freedom’ that war vets fought for.

Looking at international media, there have been over 1000 articles already published by media outlets in the US this week.

Unsurprisingly, the top emoji that appeared in posts about both events was the rainbow flag.

These two events undoubtedly started a conversation online about LGBTQIA+ pride in Australia. They just weren’t the conversations the Shrine and the Sea Eagles intended, harming communities, and their own reputations, in the process.