In an interesting little factoid to come out of Edelman’s ‘2012 Trust Barometer’, Australians believe their scepticism towards marketing messages can be overcome with just a hint of repetition.

The study [Read more about it here – Ed], which surveyed 1,000 Australians, asked respondents to ‘Think about everything you see or hear every day about companies, whether positive or negative. How many times in general do you need to be exposed to something specific about a company to believe that the information is likely to be true’ in a test of just how easy the general public is to win over.

The findings appear to reinforce the power of repetition, with 56% of respondents claiming they only need to be exposed to information three to five times to believe it’s true. The average number of exposures required to overcome the sceptics was 4.6.

Given that what people say they’re like and what they’re actually like can often be two very different things, these self-stated findings should be taken with a big grain of salt. But it’s interesting to note how much of a push over respondents thought themselves to be.

One wonders though how many times the respondents were asked the question in order to get them to admit their own defeat. 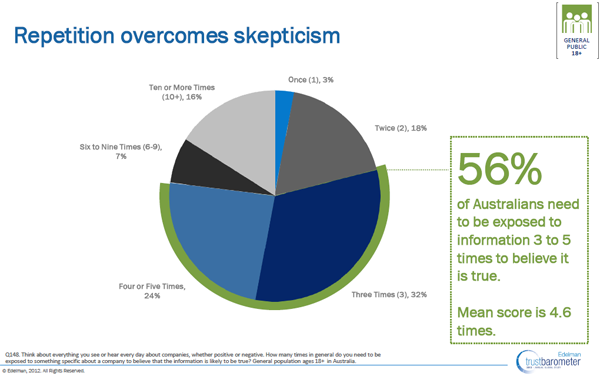