This case study examines how Cartoon Network leveraged TV, social, and influencers to reach a new generation of  young fans and re-engage an audience of parents that watched The Powerpuff Girls when they were children.

The Powerpuff Girls is one of Cartoon Network’s most popular and enduring brands. The latest series premiered in April this year, 18 years after its initial global debut. The campaign for the new series launch aimed to reach a new generation of young fans as well as reengage an audience of parents that watched the series when they were children.

The strategy incorporated elements that reached beyond the traditional TV space including apps, websites, YouTube influencers and various distribution platforms, to reach new potential fans. The campaign in Australia follows one that was launched in the US which incorporated Periscope, iTunes and included a fashion partnership with Jeremy Scott and Moschino.

With more than US$2.5 billion in retail sales generated since its debut in 1998, The Powerpuff Girls is one of the top-grossing Cartoon Network brands of all time.

The campaign aimed to publicise the return of The Powerpuff Girls to the Australian market and to encourage people to tune in to Cartoon Network to view the series. It took a digital-first approach with the intention of targeting the show’s core audience (kids 5-12 years old) and millennials. The campaign’s success was measured on achieving engagement beyond standard TV ratings.

The Powerpuff Girls campaign was launched at the beginning of April 2016 and ran throughout the month. The campaign strategy was adapted to suit changing media consumption habits in Australia, with a shift towards the digital space. Turner’s annual ‘New Generations’ study into kids’ media viewing habits guided the roll out strategy, which took a digital-first approach to increase campaign reach with social and influencer components.

This supported the program roll out on TV, Turner’s strongest channel.

Cartoon Network has never had a show launch that has hit so many different platforms and expanded its audience across so many linear and non-linear channels. Significantly broadening campaign reach outside of pay TV channels, Turner incorporated platforms like YouTube, Facebook and a free teaser video iTunes. In just three days the teaser video had already amassed 336,000 views on Facebook, with 1.2 million people reached.

The following campaign components were executed throughout April 2016.

A new episode of The Powerpuff Girls was made available to download on iTunes for free from March 15 – April 5, streaming concurrently with the TV premiere on Cartoon Network’s regional websites and YouTube channels. 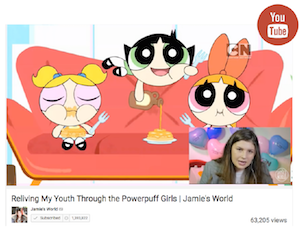