Coca-Cola has suspended its #MakeItHappy Twitter campaign after being tricked by blog site Gawker into reposting passages of Hitler’s manifesto, Mein Kampf.

The campaign was set up during the Super Bowl to retweet negative comments posted online in the form of retro ASCII art, quoting the hashtag #MakeItHappy:

But Gawker thought it would be funny to test the Coca-Cola machine by setting up a bot to send it passages from Mein Kampf, the infamous manifesto by Adolf Hitler.

A Gawker blog post chronicling the event reposts 14 ASCII art tweets sent by Coca-Cola made up of the Hitler passages.

This one reads: “We must secure the existence of our people and a future for White Children”. 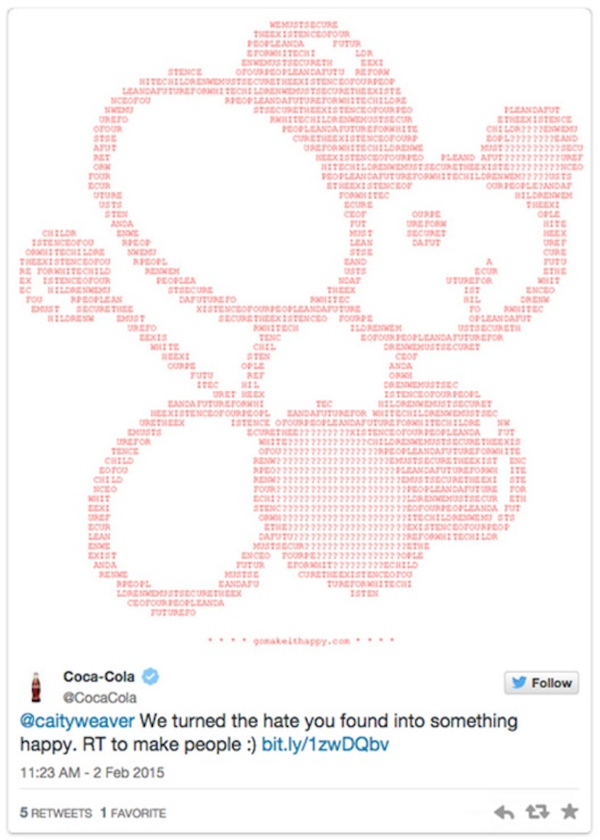 Undoubtedly, not a good look for the Coca-Cola brand.

“It’s true – we asked Coca-Cola to tweet about its concern for the continuing existence of the white race. But this is not particularly different from asking for a retweet from a brand or a celebrity,” Gawker says in its defence, suggesting Coke should have more closely monitored the tweets it engaged with for the campaign.

Coca-Cola has suspended the campaign, providing the following statement to Gawker:

“The #MakeItHappy message is simple: The Internet is what we make it, and we hoped to inspire people to make it a more positive place. It’s unfortunate that Gawker is trying to turn this campaign into something that it isn’t. Building a bot that attempts to spread hate through #MakeItHappy is a perfect example of the pervasive online negativity Coca-Cola wanted to address with this campaign.”