Google has unveiled the next step in its master plan by integrating its existing search service with its social networking products, and in turn presenting new opportunities and challenges for marketers.

‘Search plus Your World’ will roll out beginning this week, allowing Google+ members to search against both the broader web and their own Google+ social graph. Two sets of results will appear for users who perform a Google web search while logged into their Google account, provided they have activated Google+.

Forrester Research analyst Melissa Parish has suggested the move could benefit marketers by providing an additional metric to track for social media, by answering the oft-asked ‘What’s the benefit of amassing all these followers?’ question, and by accelerating the growth of a brand’s social audience (on Google+, at least).

But the other side of that coin is that despite Google+ already having over 60 million members, activity doesn’t seem to be picking up. “For the virtuous circle to happen, good content and engagement has to be created in the first place – by both brands and users,” Parish says. That means brands will have to ensure they’re truly adding value by focusing on content that is relevant to the audience, not just making noise.

Google’s rationale behind the move is to deliver more personalised search results, which may sometimes be items from the public web, while at other times include content such as text or images shared by a user’s network of friends.

On its blog, Google says, “These wonderful people and this rich personal content is currently missing from your search experience. Search is still limited to a universe of webpages created publicly, mostly by people you’ve never met. Today, we’re changing that by bringing your world, rich with people and information, into search.”

The move transforms Google into a search engine that ‘understands’ not only content, but also people and relationships.

Google gives the example of searching for a vacation destination. Results will now turn up pages from the public web, but also posts about the experiences your friends have had on their vacations and pictures they’ve posted. This mirrors how information would be collected in the offline world, where influential people and your friends’ experiences are more meaningful than impersonal or official information sources.

However, the integration of search into the results will only include Google+ content as the search giant does not have the same access to other social networks.

Writing on the topic for Mashable, Chris Taylor says, “Though you have dozens of Facebook and Twitter connections, Google will not attempt to enrich the results with that part of your web.”

Mashable also reported that Twitter has taken exception to Google’s move, claiming their real-time information is often the most relevant result on Google: “As we’ve seen time and time again, news breaks first on Twitter,” said Twitter spokesperson, Matt Graves. “We’re concerned that as a result of Google’s changes, finding this information will be much harder for everyone.”

And Twitter’s criticism has received at least partial support from telecommunications analysis firm, Ovum. “[It’s a]nother decision which threatens to further narrow the definition of evil in Google’s famous motto, ‘don’t be evil’, for a couple of reasons. Firstly, it risks further accusations that Google is unfairly cross promoting its own services over those of others. Secondly, it risks crowding users’ search results with items they may find less relevant, negatively impacting Google’s core value proposition,” says Jan Dawson, chief telecoms analyst for Ovum, while also pointing out that it’s not an altogether unsurprising move by the search giant.

For a snapshot of the changes this move brings compare the below images of the same search performed while logged out of Google+ and while logged in: 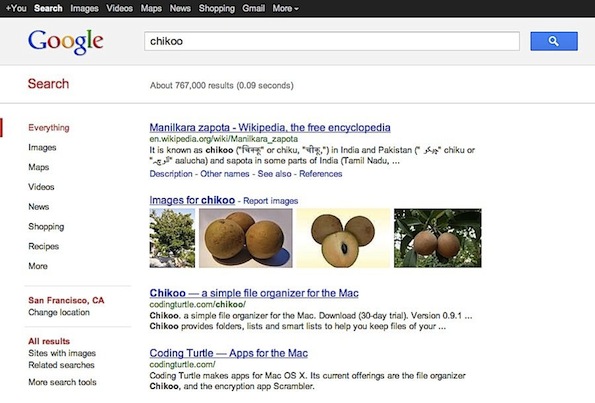 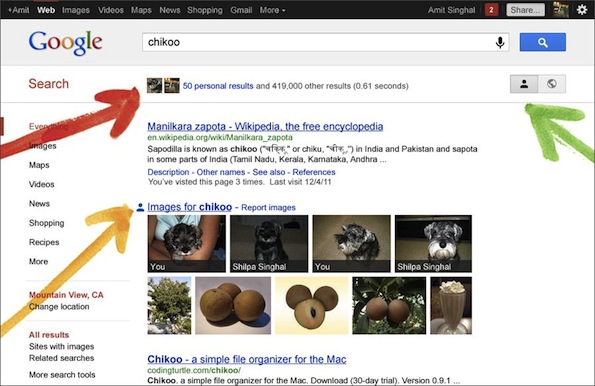