Whether it’s fact or urban myth, there were rumours that a guy in New York in the late 1990s used to stand outside stores that sold Windows-based PCs and convince people that were about to enter that they really should buy an Apple instead. He didn’t work for Apple but that was simply how he chose to spend his weekends.

Sometimes I feel like that man. Some sort of irrational connection to a functional brand that makes me turn into a loopy evangelist. Ironic as I spent most of the 2000s telling my Apple-loving graphic designer father that the PC was the way forward. I turned. And how I’ve turned.

So when I saw this status update, it simply meant I had to respond.

“Hey iSheep, check the specs… your new iShite 5 still has a smaller screen than the (released months ago) Samsung Galaxy S III, about 1/3 the standby time, is WAY over-priced, and on top of that, you’ll have to buy new connectors for all your existing cables. But i’m sure that won’t stop you cueing up at the iShite store this weekend to have a drool and buy one anyway, just so you can show your friends how cool you are… Baaahhh!”

We’ve all seen updates like this. Some of you could have written them. Some of you might have responded to them. Probably most of you are sensible enough not to get involved. If I was Robbie Farah, I might have got the PM to take this one on for me.

Further down in the argument on the Facebook page came another accusation pointed towards Apple.

“I’m sure you can appreciate how Apple’s marketing (duping) machine parts so many fools from their money in the name of cool and how that translates into very profitable business.”

“If marketing can get people to buy a device without testing any others than marketing has done its job and the customers are none the wiser.”

So a slice of the great Australian public believe we’re being duped. But whether we’re talking about iPhones, coffee machines, bank accounts or cars, duping people simply doesn’t work. Marketing that cons people is now found out quicker than ever.

As I retorted, the value of a brand is made up of two things: the promise and the delivery. The promise is what we as marketers do, through communication, branding, tag lines, digital, print and so on. We present a product and the benefits to a consumer for them to weigh up whether it fits to their need. Sometimes it’s a need they didn’t know they had. This promise makes up just 30% of their perception.

But the actual interaction with the brand makes up for the remaining 70%. In the case of buying a car, it’s the sales people, the price, the service centre, the comfort and reliability of the car itself and so on. A great advert can sell us a car, but if we climb in and its awkward to drive, this overrides our purchase and will make us look elsewhere. 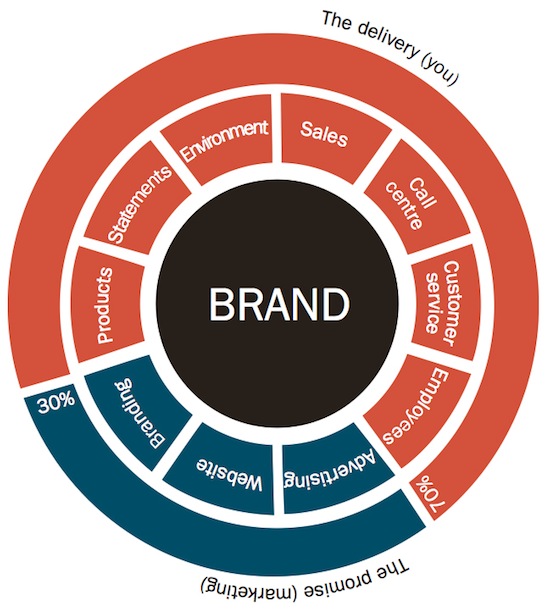 It’s the same for an iPhone. Did we get pulled in by the shiny newness of an iPhone and its marketing only to get trapped inside with an inferior product, upgrading over and over again because we know no better?

If our interaction with the brand didn’t deliver, if we didn’t love our iPhones, we’d switch. We saw that happen with Vodafone last year. If the original status update was true, and we were iSheep with our iShite phones, then after our initial two-year contract, we’d be switching.

The numbers say that just didn’t happen. A ‘Wireless Device Lab’ report commissioned by Strategy Analytics in Western Europe indicated that Apple delivered by far the highest levels of consumer satisfaction and the highest level of repeat purchase intention. This was followed by Blackberry, Nokia and then Samsung and LG.

iPhone owners are happier with their phones and more likely to repeat the purchase than any other brand owner.

This isn’t the marketing talking. This isn’t even the retail experience convincing them. This is actual interaction with the brand. Processor, standby time, screen size aren’t core drivers when it comes to the consumer’s enjoyment. Price is even less so – we’ll pay higher for something we find significantly more enjoyable to use. Overall experience transcends the details. Steve knew this.

I remember doing an online survey from Virgin while waiting for a return flight home from Sydney to Brisbane once and they wanted to know how I’d found the food at the Virgin part of the terminal in Brisbane and how easy it had been to get a taxi at my arrival point. Virgin has figured out the same thing as Apple – that the overall experience was the experience. Great flights and great service can be destroyed by standing in a taxi rank for two hours in the rain.

Whoever you employ to generate your advertising, plan your marketing strategy or re-align your branding, it can all be undone by poor customer experience, and when that experience governs 70% of the consumers impression of your brand, its vital as much attention is paid to this.

My experience as an iSheep with an iPhone 3G and 4 has always been great and I expect that hopefully next week with an iPhone 5 it will continue in that vein. I tried a Samsung for 48-hours once. The following Monday morning I rushed to the shop to return it and collect the iPhone 4.

Previous Article
Facebook turns its attention to social search, says Zuckerberg
Next Article
At the speed of marketing: making the right decisions in real time