A number of globally recognisable technology brand logos have been matched up with letter-based logos found in a 1989 design book.

Spencer Chen, vice president of marketing and business development for Alibaba, exposed the similarities between the logos of Medium, AirBnB, Flipboard and Beats and images printed in the 1989 book Trademarks and Symbols of the World: The Alphabet in Design. 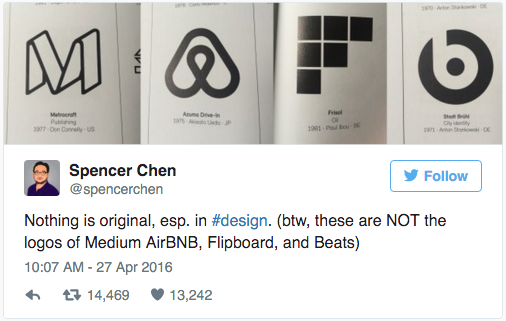 Chen’s tweet has had a viral response, with passionate commentary from many respondents, many from the design industry, some even raising questions about trademark violations.

Twitter respondents, and Chen himself, were quick to mention the post-modern idea that nothing is original, especially in the world of design, but it is interesting to note this many brands taking inspiration from the one source in what seems like a very direct way.

Others pointed out that there is a finite amount of abstractions that can be applied to something as simple as letters that make them distinct and recognisable, and therefore repetition will inevitably occur.

The main way many consumers engage with these brands, and others, is via apps on smartphones, which limits the size available which brands have to play with logo ideas, making striking, single letter logos an appealing option.

Brand marks similar to the Beats logo, while appearing in the 1989 version of the book, can be seen crafted by a different company in 1971, with Anton Stankowski’s Stadt Bruhl logo.

Logos similar to Flipboard’s can also be seen as far back as 1981, and brand marks similar to Medium’s logo back in 1977.

Finger-pointing and uproar about brand logos plagiarising or deriving ideas from others is hardly a new issue, another recent example is the Tokyo 2020 Olympics’ original logo, which was eventually pulled and replaced with a checkerboard logo after public derision due to its similarity to the Belgian Theatre’s logo.

However, it seems safe to say that it’s unlikely Beats, AirBnB and others will be changing ‘their’ hugely iconic logos anytime soon.

And then there’s TS Eliot’s argument – although it’s unlikely to hold up in court – that ‘talent imitates, genius steals.’

Previous Article
How savvy financial firms are repositioning for the under-50 market
Next Article
Brain trust: Who’ll win the Facebook vs YouTube online video war?