Media news: Winter is coming for Adshel and The Weekly Times is going national after 147 years

Media news: Winter is coming for Adshel and The Weekly Times is going national after 147 years

Outdoor advertising media company Adshel has launched ‘Shine Brighter with Adshel,’ a new campaign which reminds brands of the necessity to stand out during the winter months when less daylight hours can disadvantage the visibility of out-of-home advertising assets.

Emphasising the effects that winter has on the commuter journey inclluding changed behaviours and attitudes during the cooler, darker months, the campaign urges advertisers to engage commuters by selecting Adshel.

Adshel estimates 32% of the daily audience for outdoor advertising as falling in peak evening commute times.

“In order to deliver on the promise of enabling advertisers to ‘shine brighter with Adshel,’ our suite of quality illuminated products ensures that brands are showcased with optimum quality everywhere, every time, says Adshel’s head of marketing Charlotte Valente.

The Weekly Times, the newspaper which covers rural and regional affairs has launched TheWeeklyTimes.com.au as a national, online voice for rural Australia in the ‘128k’ campaign.

The paper, which since 1869 has covered Victoria and parts of Southern NSW, aims to tell the story of the 128 thousand Australian farmers that feed and clothe millions of people around the world in the campaign.

The Weekly Times editor Ed Gannon describes the national expansion, and ‘128k’ campaign, managed by Redhanded, as a “growth story – we have our traditional print footprint in Victoria and Southern NSW, and nowadays with a digital offer there is no way we have to be bound by borders.”

The reinvention comes as Bauer research shows that more than 90% of Dolly’s 14-17 year old target audience engages with the title via their smartphones.

Content will remain largely the same as the print version – now in its 46th year – but new features will include a custom quiz, emoji reactions, video content, and native video advertising via platform Teads.

“Smartphone usage amongst our audience is very high which is why a mobile first strategy is no longer a nice to have but a necessity,” says Dolly publisher Marina Go.

The addition of the ABC Radio network will allow iHeartRadio audiences to access stations from the public broadcaster anywhere they are via the platform, including:

“Adding the power of the ABC to iHeartRadio Australia is another magor milestone in the continuing growth of the platform in Australia. Being a truly agnostic platform we enable both public broadcasters and other cmmercial radio companies to live side-by-side, all to the benefit of the Australian listening public,” says Geraint Davies, head of iHeartRadio Australia.

Also launched is a new tool that makes collaboration on branded content easy and gives marketers more visibility into and control over their efforts on the platform.

Facebook defines branded content as any post from media companies, celebrities or other influencers that specifically mentions or features a third party product, brand or sponsor. 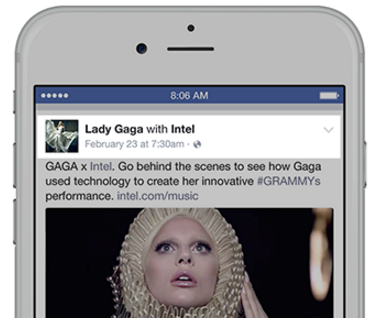 Concrete Playground is nominated in the category of General Website – Cultural Blog/Website and is up against international nominees VICE, Nowness, Jazz at Lincol Centre and Polygraph.

The Webbys, celebrating its 20th year in 2016, are the annual awards run by the International Academy of Digital Arts and Sciences and celebrate ‘excellence on the internet including websites, interactive advertising, online film and video and mobile content.’

Other Australian and New Zealand nominees include Triple J’s Hotest 100 site in the Music category, and Trusted Housesitters – based in Australia and globally – for community.

The Webby winners will be announced on 26 April, before the 20th Annual Webby Awards event on 16 May.

Previous Article
Why Kellogg’s is opening a cereal cafe in Sydney this week
Next Article
Spirit of Anzac a learning experience for creative director, too