Nike’s ‘Better for it’ marketing campaign has launched in Russia with ‘Real girls of Moscow’, a campaign that aims to empower Russian women to be active through video, street art and GIFs.

The ads show Russian women use their fortitude and determination to achieve tough challenges in the face of adversity.

In April, Nike Women launched its ‘Better for It’ motivational campaign in the US and now Nike is extending the campaign to Russia with their ‘Real girls of Moscow’ campaign.

The ‘inner thoughts’ video ad series from Nike’s ‘Better for it’ campaign could be described as cute and playful in contrast to their ‘Real girls of Moscow’ video series, which has a harsher, grittier and more dramatic feel to it.

Whilst the US ‘inner thoughts’ ad series focused around women overcoming their insecurities surrounding working out the ‘Real girls of Moscow’ ad series show women overcome physical hardships such as a boxer getting punched in the face, a yogi holding a tough pose and an ice skater falling on the hard ice.

The athletes are also featured in a series of outdoor murals across Moscow which works in conjunction with a series of animated GIFs which use geo-location to allow people to find the mural in real life after seeing the GIF.

Wieden + Kennedy, creative director, David Smith said they wanted to give this work a sense of legacy.

“So many ads today are about a one second moment, and we wanted more, we wanted pieces that would be remembered for a long time,” Smith said.

“So we broke the usual parameters of advertising and created a series of giant outdoor murals.

“The scale and beauty of the photography really gives these girls the heroic stature they deserved.” 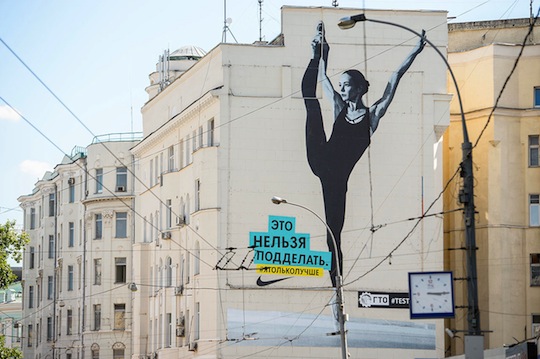 Earlier this year Nike assessed that by focusing on women, young athletes and runners they can add to their $US28 billion of yearly sales.