There’s no doubt about it – Australians have become obsessed with MasterChef. The final episode of the recent cooking phenomenon attracted record-breaking ratings, and with it, saw the launch of the first ever TV promo for the newest addition to the franchise: Junior MasterChef.

By ‘listening in’ on audiences’ online discussions, a recent study conducted by UniSA’s Ehrenberg-Bass Institute explored how people’s opinions changed as a result of having seen a taster of the Junior version. They found, not only did the launch of the exciting new ad trigger a substantial spike in comments about Junior MasterChef, but also the discussions about the show became significantly more positive after the promo launch. This is good news for Channel Ten, and for other Junior MasterChef stakeholders such as advertisers and sponsors.

Using Nielsen’s BuzzMetrics software, the study involved collecting online conversations about the spin-off program, posted between late October 2009 and mid-August 2010. Each electronic post contained the key search terms, ‘Junior MasterChef‘, or slight variations of these terms. Those that were unreadable or deemed irrelevant were excluded.

410 individual comments were used in the analysis. For each of these posts, two main elements were identified:

As some posts contained multiple issues relating to the show (e.g., “The dishes on Junior MasterChef look great. I wonder if it will be aired during prime-time?”), the analysts could identify up to two themes in terms of what each post was about.

How much word of mouth?

The launch of Junior MasterChef’s promo had an overwhelming effect on the number of comments generated about the TV show. Prior to the first promo, online comments about Junior MasterChef occurred at a fairly steady pace. After the launch of the ad however, the amount of comments escalated. And the increase was truly staggering ¬- more comments had been generated in just the fortnight following the promo launch, than all of the comments posted in the nine months prior. But don’t celebrate too soon – as the amount of buzz quickly tapers off after a few short days. This suggests that the promo itself does not remain incredibly newsworthy for long.

Many different elements relating to the program were mentioned within conversations. The most dominant themes overall are shown in the following table:

Did the launch of the first Junior Masterchef promo change the content of discussions?

The researchers on the project also explored whether the nature of online conversations about Junior MasterChef changed following the launch of its first ad. To aid in their understanding of this, they compared the themes that were prominently discussed prior to and post promo launch. 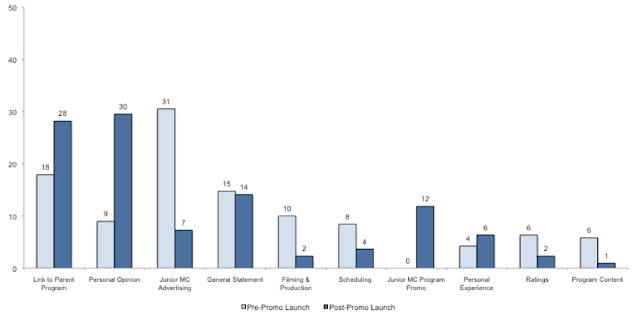 Further analysis was carried out on those comments about the TV promo specifically, providing insight into which aspect/s of program promotion best stimulated the word of mouth.

Overall, there was a sense that the ad left MasterChef fans with an appetite for more. Comments about Junior MasterChef’s new ad fit into two broad categories, these are:

General comments about the promo: Words used to describe the promo itself, and how the promo portrayed the Junior MasterChef series included: good; crazy; upbeat and exciting; decent; fantastic; very interesting; a treat; pretty good; cute; fun; as good as the original; like great family viewing; and fricken awesome.

Were comments positive or negative?

As well as classifying the content of conversations, each post was also categorised broadly into one of the following groups: Very Positive; Generally Positive; Neutral; Generally Negative; Very Negative or Mixed. This enabled the researchers to assess the valence distribution of the word of mouth, and examine whether there were any differences prior to and post promo launch. 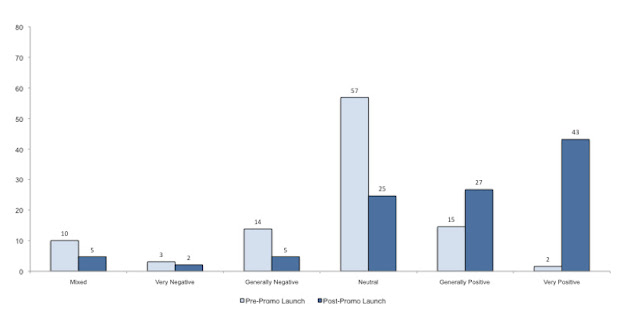 Prior to the launch of the promo, comments about Junior MasterChef were predominantly neutral. After the first promo was shown however, the comments shifted to become much more positive.

The overall positive reaction amongst viewers is, no doubt, a palatable outcome for Channel Ten executives and shareholders. These research findings provided by the Ehrenberg-Bass Institute also show the value that a single program promotion can have on word of mouth, in turn highlighting the importance of TV promos in securing audience tune-in.

This study is part of a larger research project, which examines how viewers learn about new television programs, and particularly the role that word of mouth plays in this. The next step will involve investigating how the content of discussions change prior to, and post program launch, and how the word of mouth about new TV programs differs to that of returning programs. An additional component of the research will explore which specific elements within a program promotion are most likely to stimulate conversation.