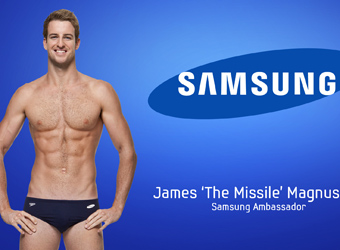 The partnership will run until the end of 2015, and include the Rugby World Cup in the United Kingdom, signage at all matches, hospitality, digital rights and player appearances. It will be supported by an integrated marketing campaign through broadcast activity, as well as social media.

“Rugby Union is a premium Australian sport and we’re thrilled to announce this partnership,” says Arno Lenior, marketing director, corporate, at Samsung. “One of the key focuses for Samsung this year is intensifying our relationship with the consumer and we see this partnership with the Qantas Wallabies, Test Rugby and Super Rugby Competition as a way to propel this to another level.”

The partnership adds to Samsung’s extensive sponsorship portfolio which includes being a Worldwide Olympic Partner for Wireless Communications Equipment, partner of the Australian Olympic Team and recently engaging Olympic swimmer, James Magnussen, as a brand ambassador.

Magnussen fronts a series of Olympic inspired advertising campaigns across television, print and online for the brand, and as part of his role as Samsung brand ambassador, will make a number of appearances in the lead up to and post the London 2012 Olympics.

Previous Article
Let’s create the retail stores of the future now, not later
Next Article
Mobile here and now