To tap into the television viewers most likely to part with their cash, advertisers should target Masterchef Australia, Seven News and Packed to the Rafters audiences according to Roy Morgan Research.

The analysis from the research company’s Single Source Data and consumer confidence study, found that some TV shows boasted a greater number of consumers with positive sentiment towards finances and spending than others.

In 2011, Masterchef lead the field for the highest number of positive consumers  with 1.753 million per episode, a figure 31% higher than the second ranked program, Seven Network’s Monday-Friday News with 1.337 million. Three more Seven Networks shows rounded out the top five – Downton Abbey, Dancing with the Stars and Packed to the Rafters.

According to industry director of media research at Roy Morgan Research, George Pesutto, audience segmentation on variables such as ‘purchase intention’, ‘consumer confidence’ or ‘early adoption’ is becoming more prevalent as marketers look to reach high value, active consumers within their target audiences.

“Segmenting target audiences in this way can help brands to create more targeted and efficient marketing campaigns, maximising campaign results and return on investment. It’s about being better targeted to consumers who are ready to buy now, and minimising wasted effort on consumers who aren’t in the market, even though they might be counted as part of a brand’s overall target audience,” Pesutto says.

“Consumers with a confident outlook to the economic future are now the most valuable target market, particularly for higher value goods and services, and understanding these confident consumers is key to success in many categories.”

The Seven Network dominated the list of shows with the most confident viewers in 2011, taking out seven out of the top 10 spots. The Nine Network narrowly missed out on the top 10, (its highest ranking program, Underbelly, ranked in 11th place), with Network 10 making up the other three places in the top 10. News/current affairs, dramas and reality programs were the programs of choice for confident consumers. 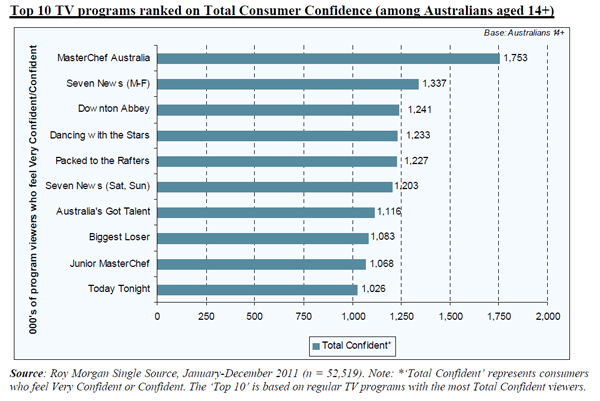