Social video buzz – which Olympic sponsor is winning the race?

Social video buzz – which Olympic sponsor is winning the race? 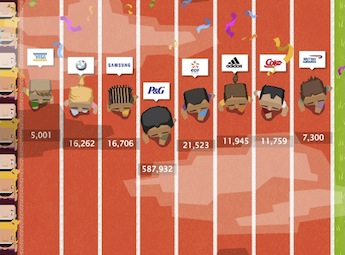 The chart tracks shares of videos across Facebook, Twitter and the blogosphere in order to arrive at a ranking for each brand’s social video success in the lead up to first Summer Olympic events taking place on 25 July in London.

The eight highest-ranking brands are pitted against each other in the final medal race – visualised below – with P&G ultimately claiming the gold ahead of EDF and Samsung, with 2.2 million, 122,000 and 98,000 shares respectively.

If you can’t see the frame below, please refresh this page.

Tags:
Previous Article
Report: Online giants set to dominate local media for ad revenues
Next Article
The sound of the Olympics – how brands use music