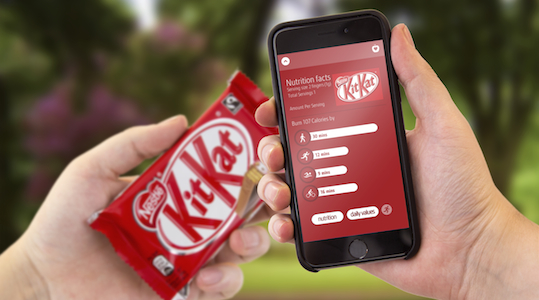 The relaunched Blippar app (available in April 2015 on iOS and Android), allows users to ‘blip’ objects via their smartphone cameras to activate digital search.

Since its launch in the UK in 2011, Blippar has offered augmented reality and 3D experiences on products through users’ phones. Its success in that area has fuelled this move into visual search.

Their content has been “blipped” by millions of users around the world, Mitra says.

The app will begin in visual search by “making all English-language album covers, fiction books, DVD covers and movie posters blippable”. Users who blip these items will see contextual, snackable information within the app.

“In the future, Blippar will add to its growing catalogue of blippable objects in stages, with the ultimate aim of making everything blippable – from an apple, to a chocolate bar, to a dog on the street, to the Eiffel Tower and beyond,” the company says.

The brand is partnering with Digimarc to take advantage of its print-to-digital technology, expanding on Shazam’s mission for ‘making traditional media clickable’ by providing gateways to content.

“We’d love to work with local publishers and some of the outdoor guys on that solution.”

Although the company is staying true to its music heritage, Shazam is focusing on branching out to expand its relevance, which includes this new foray into visual search as well as into beacon technology.

“The basic premise is that idea of Shazam enabling multiple elements of the media mix – broadcast, both free-to-air and subscription, cinema, radio, pre-roll, increasingly now bricks and mortar, then as we start to expand into beacon-based players and visual, it starts to really complete the picture.”

Shazam currently offers its popular audio recognition technology to brands, inviting audiences to open the app to ‘Shazam’ to see digital content curated through the app.

Shazam is yet to release much more information on it has visual search plans, but here is a video showcasing some of the work it’s done with brands: