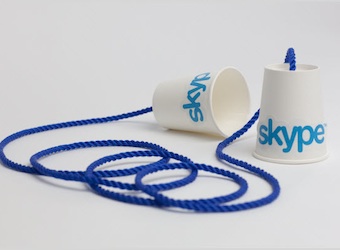 Skype has previously offered advertising on Windows 8 devices and iPhones but these enhancements are hoped to provide larger marketing channels to advertisers.

Mikaela Lancaster, director of specialist platforms at Mi9, says, “We’re making significant investments in mobile and our commitment is driven by the powerful trends we’re seeing in smartphone and tablet usage.

“Today’s news expands the creative possibilities and global reach Skype’s mobile advertising platform. For marketers, this provides a lucrative new channel to reach customers where they are already spending their time. This means now more than ever is the time to start delivering engaging campaigns for mobile.”

Skype has seen considerable exponential year-on-year growth in mobile users. Each month, the number of new users coming to Skype on a tablet or phone is double what it was the year before. In fact, mobile users now represent nearly half of the total new users joining Skype every month.

Recent Mi9 research found that 68% of computer users in five countries multitask, or cross-screen on multiple devices in tandem. This growth in mobile as, consumers become increasingly connected to a range of media sources at once, means mobile advertising on platforms such as Skype is an increasingly profitable growth area for brands.

Lancaster says, “Lifestyles have changed, we are increasingly busy and spend more time on the move. There is growing tension between our desire for more intimate human connections and need for fast and efficient communication.

“Skype mobile resolves some of this friction by allowing people to talk, text, share and video conference no matter where they are in their day. It’s a convenient way to switch between rich and quick forms of communication.”

Skype will also be using targeted advertising, but is adamant that the protection of people’s privacy and data is paramount to Microsoft and no ads served by Microsoft collect personally identifiable information.