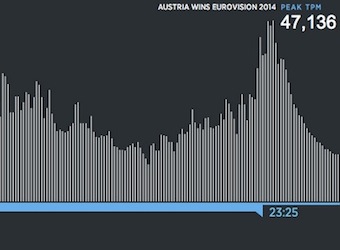 According to Twitter’s UK team, tweeting peaked during the announcement of Wurst as the winner, followed by her performance earlier in the night.

The final count is in: 5.3M+ Tweets sent around the #Eurovision final. Peak TPM for @ConchitaWurst‘s victory. pic.twitter.com/O3s9nuNLfR

And @ConchitaWurst won not only Eurovision 2014, but also gained  number of followers on Twitter.

“This night is dedicated to everyone who believes in a future of peace and freedom.” @ConchitaWurst #Eurovision pic.twitter.com/7N12w0DUFy

The third most tweeted about moment came as France’s Twin Twin performed its song ‘Moustache’ (39,353 tweets per minute). Interesting, because Twin Twin placed dead last with only two votes (for comparison, Wurst scored 290).

Tags:
Previous Article
Publicis and Omnicom to go their separate ways as merger is called off
Next Article
In the endless pursuit of happiness, our Earth has become a value proposition