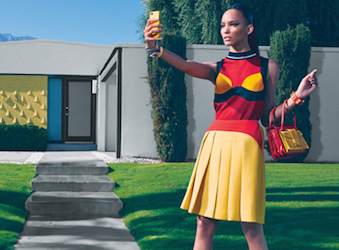 Future Laboratory co-founder Chris Sanderson chats with Marketing about the key consumer trends that will become prominent in 2015, centred around a concept he’s calling the ‘me-conomy’ – a concept that includes the fragmented self-identity that people project online and which is changing the relationship between brands and consumers.

Central the discussion of the ‘me-conomy’ is how and why consumers are becoming more fragmented and difficult to target due to increasingly fragmented personalities that people present online, as well as shifts in retail and consumer demographics. Sanderson says this is changing the way people do business, how we buy products and how we socialise online and offline.

Chris Sanderson: The big thing we’re talking about in our briefings is what we call the ‘me-conomy’.

We’re really going to focus [in briefings in Sydney and Melbourne in February 2015] on this sense of self and importance of self.

We’re going to do this through a couple of different themes: we’ve been looking a lot at what we call the ‘sharded self’, this idea that increasingly our personalities and people are sharding themselves and we’re beginning to realise the impact of that and our relationships with brands.

M: What do you mean by ‘sharding’?

And it’s therefore [necessary] to start to think about, well what is going to be some of the impact of that? Of having a different sense of self, or a requirement or even a responsibility to behave in different ways and to output yourself almost in different ways.

I think we’re only just at a point where we’re beginning to understand that social networking is all about operating in the same way. Many of us now have many different social platforms we use, and we behave on each of them differently, and they require different forms of communication. And in them we present different aspects of ourselves and I think that’s hugely important.

M: Given that idea in social psychology that people have different behaviours or even personalities in different settings was around long before social media, would you say that rather than being because of social media, it’s been highlighted by social media?

CS: Without a doubt. Interestingly, we’ve been looking at the work of the French sociologist Guy Debord from the sixties. He was writing way back in the early sixties in his book The Society of the Spectacle about this idea of how the history of 20th-century life could be understood as being the decline of ‘being’ into ‘having’ and ‘having’ into merely ‘appearing’.

I think this idea of representation and how things used to be about direct living or direct engagement is now about representation is becoming more and more born out, and it’s not a process that’s just begun. It’s something that has continued.

But when we get to a point where ‘selfie’ becomes the word that defined 2014 and it’s a word that has been used 17,000 more times in a year than it was the year before, you sort of get the faint ridiculousness of a feature in Vanity Fair, for example, over the summer where you’ve got Kim Kardashian taking a photo of herself and her baby while her husband Kanye West is taking a photo on is iPad of her taking a picture of herself and all that in itself is being photographed for Vanity Fair by Annie Leibovitz.

This kind of layering of self-focus or self-interest or self-obsession is really interesting. And that Kim Kardashian is set to launch a big coffee-table book next year which is just entirely made up of her selfies is kind of an interesting litmus test for where we are right now in terms of our sense of media and conversations.

M: In terms of shopping and brands being one of the major ways people use to create their own identity, of holding a particular set of values, what’s the relationship between your concept of the ‘me-conomy’ and concepts like value shopping, shopping based on beliefs and values?

CS: Well, this is where it gets interesting, and the kind of messages that we’ll focus on in the briefing is that the impact for brands is manifold.

One of them is clearly the fact that we have a generation that are very brand-savvy but are perhaps less brand-focused than their older brothers and sisters. Their sense of self and their sense of engagement with products is more important than their sense of brand.

So having gone through a period where it was often all about brands and name recognition and name checking, our prediction is that we’re moving into a period where for an increasing number of consumers a brand name is less important, and issues such as value propositions are more important.

We’re also seeing the continued growth of a generation of consumers who seem to actually be less interested in ownership, because they’re more interested in the experience than actually necessarily owning something.

The desire to buy something is shifting into the understanding that when I need something I need to be able to make use of it. Hence, the continued growth of what’s been called the ‘sharing economy’, the idea that I can just rent something when I need it… I don’t need to buy a motor car in order to exert my manhood or to prove my status.

I think on that level there are some very interesting things going on. We are now in a situation across developed economies where standard of living has actually fallen for the first time in a generation, so your children are going to look forward to a standard of living that is worse than that which you enjoyed at their age. Issues such as that are ensuring that people really question an understanding of what an economy is there to do. If it’s not there to actually serve its individuals’ needs, just precisely what are we all working towards?

M: Is that a question most people would even consider in their day-to-day lives?

CS: As consumers we don’t necessarily question these things head on, we do it more obliquely. I think certainly it alters the way that we behave or the way that we think about what we want to buy or what it is we think is necessary or important in our lives.

So the focus on a lot of the pillars that defined successful consumerism in the 20th century really now are beginning to show signs of weakness here at the midpoint of the second decade of the 21st century.

For us this is where we can start to see some signs of change, of how society is changing in terms of its opinions and attitudes, and often those that defined what it meant to be successful or what it meant to be an engaged consumer or citizen in the 20th century can maybe start to help us understand what that might mean and look like in the 21st century.

Clearly, consumerism is still with us, we still want to engage and to consume, but ownership might not necessarily be the prerequisite.

That’s born out by recent work by the Boston Consulting Group, which, although specifically about luxury, showed that across the world consumers now spend more on what they define as ‘experiential’ luxury than traditional luxury products. The notion being that we’re shifting in our consumer desire for it to be wrapped up in experience rather than just sales of handbags, shoes, sunglasses, whatever. The experience that’s wrapped around it is more important and that’s what we’re actually wanting to buy.