How AR and VR will define CX with Facebook’s head of tech, entertainment and connectivity

How AR and VR will define CX with Facebook’s head of tech, entertainment and connectivity 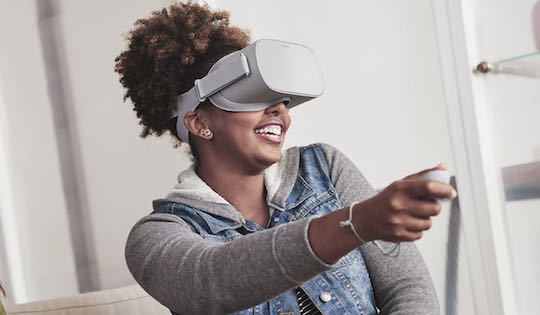 Marketing speaks with Jason Juma-Ross, about how Facebook’s getting involved with AR, VR and 360 and how it will help marketers engage with consumers.

Prior to his appearance at Sydney’s Disruptive Innovation Forum, Jason Juma-Ross – Facebook’s head of technology, entertainment and connectivity – tells Marketing how augmented reality (AR), virtual reality (VR) and mixed reality will define the customer experiences of the future, believing it will truly flourish when it becomes more about the people and less about the tech.

We did a survey in the US recently, and about 66% of people think that VR is going to become an integral part of everyday life in the future. It’s something that’s quite pervasive among the population of people as well. There are lots of high expectations.

We always think that the foundation of all of this rests on mobile, that from a technology perspective, all of the component systems in head-mounted-displays (HMD) are really the pieces developed for the smartphone war. The interesting thing about that is mobile has made this huge impact on our CX. It’s really been around in the smartphone generation for the last ten years.

It’s made companies and institutions more available, more transparent, more open, more relevant to their customers. We think that VR and AR is going to continue that trend.

Over the last 13 years of the platform, we’ve seen Facebook go from text only, through to being a huge photo repository, to being all about video, and now Live is really the thing of the moment. One way of looking at this is that VR and AR are kind of natural extensions of that.

It’s another step in that experience of being able to transmit over video, and over visual means.

Another way: it’s this real change in allowing people to share what they care about in the highest resolution, the highest fidelity we can imagine. There are those two framing components to it.

One thing we’re interested in is how to we use the platform itself.

We launched the Facebook Camera in April this year. The Camera Effects Platform is what we call our video-first strategy. That’s really centred around people. These are really in their early days, and we’re working to optimise both the camera and the Camera Effects Platform for people-first. So you can see that in the app, that you swipe right with your thumb in the mobile application.

Right now, those are all organic applications. They’re non-commercial, or at least they’re in the very early stages of commercialisation – but we’ll look to find ways for businesses to participate in a more involved way as we go along.

The second one is Oculus.

The Rift HMD is currently the most advanced headset we produce. It weighs just under half a kilo. It needs a high-spec PC to run it, and 500W of power. We’re a long way from where we would like to be in the industry with AR specs weighing 100 grams and low-powered enough that we can wear them all day.

That’s the way we want to see this going, and that’s the way that we fully expect it to go. If you think about the frameworks of technology in place behind this, that’s effectively a mobile phone on each eye with different, lighter transparent interfaces and everything else.

But, the base-level technology is there for us to be able to start to conceptualise that now. It’s super interesting to see the industry work towards those much lighter HMDs or specs that you can wear all the time.

The final thing is, if we really want to make this pervasive and mobile, then it has to operate well over cellular networks. Cellular networks – as we all know from our own experience – are struggling sometimes with video right now, let alone 360 video and fully immersive VR environments.

We’re doing things like figuring out how to generate the right compression technologies to be able to pass these things over networks. There was an initiative last year where we moved from rectangular layouts to cube formats in 360 videos, and reduced file size by about 25% versus the original.

There’s a series of initiatives that we have in that space to just try and make the transmission of this data more effective.

In what ways will it help marketers engage with consumers?

Again, it’s very early days. This is going to require a lot of experimentation. We will figure out what’s going to be useful and engaging for people on both sides of the platform. We see some really good engagement over the past couple of years with 360 video. It’s a really powerful way to have people experience something more fully than they would do through just a photo or a normal video.

We partnered with commercial organisations, marketers from Disney, to Netflix and beyond, to put 360 videos in front of millions of people in an app that more than 1.3 billion people access on a daily basis. One of the interesting things for us is to be able to get this into the hands of a lot of people through the interfaces that people already had installed.

We see that as a good delivery vehicle. We’ve also seen good engagement on some of the camera-effects type capabilities, like the frames and the masks and the Camera Effects platform. Again, you can see those when you swipe right out of the platform, and a lot of the early applications in that space tended to be around ‘if you’re a movie distributor, then you’re making masks based on the characters to support your trailer strategy’.

I’ve also seen other stuff outside of our ecosystem. Things like Ikea’s Place app, which is a really interesting one, it allows you to look around the room and put furniture on furniture into a room that the phone sees through your camera. It’s a nice way of being able to test things out. It gives you an impression of the size and the styling and whether it might fit from a size perspective or stylistically in your apartment or your room.

That’s an interesting application. People are starting to explore those things.

Do you have any predictions about how these pieces of technology will define CX in the future?

VR is going to be heavily defined by social experiences, because it is a powerful tool for connecting people in magical ways.

We’re going to see much more of that. One of the really interesting things we’re working on right now is this application called Facebook Spaces, which allows you to hang out with people that you know, and share experiences with them in the same room – doesn’t matter where you are in the world, you’re in this shared VR space with people.

We’ve launched that on Rift in early access, and we’re experimenting with that, and looking forward to exploring how that can open up new ways for people to connect and communicate.

Take that a step further: how can businesses participate in that ecosystem?

Right now, we are focused on making the best environment for customers. Then we’ll think about the commercialisation of it. It behoves us all to be doing a little bit of experimentation in that space.

Think about where the product market might be in your category, your industry.

Think about some of the questions: if you have a brand, how should your brand play out in the VR or AR environment? What should its personality be?

We have a little bit of time for experimentation, but that time is going to pass quickly as this category matures.

When I talk to businesses in the space, I say ‘roll up your sleeves, go out and test and experiment with things, and see what you can find out in terms of the great use cases for customers in your category.

‘Where can you add value as part of the customer journey?’