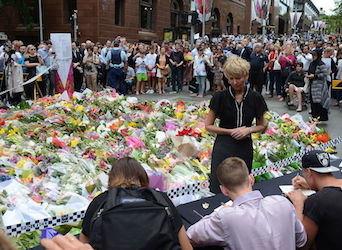 2014 has been a rough ride, writes Patrick D’souza, but the conversations we’ve been having with each other, thankfully, haven’t been.

Last week, Marketing reported the top 10 topics we’ve been discussing in 2014 on Facebook.

What struck me was that all of these topics can be categorised into three clear buckets:

Nothing gets people talking the way tragedy does

Tragedy. More than half our conversations on Facebook were centred around it. The death of Robin Williams, the twin crashes endured by Malaysian Airlines, the hovering prospect of Ebola and, even, the election of Tony Abbott at the start of the year as Prime Minister, depending on your assessment!

That we have a need to dwell on tragedy, even reflect on it, both publicly and at length, shows that deep down as a nation, we are slightly afraid, unsure, insecure – unsettled about the future –  and what it will bring with it.

The horror of the last few days has only served to heighten that feeling of uncertainty, that feeling that we are not above events as they occur, and they could well  happen to us.

This is not a new feeling, it is one that has been in place since the start of the year, bubbling to the surface, ever so occasionally, thanks to events like the budget, the death of Robin Williams, the fear that Ebola could be at our doorstep and, most recently, the events at the Lindt Cafe in Sydney.

Social currency matters, at least seems to. If one goes by the top ten places Facebook reports we ‘checked-in’ to, we find they are mainly places of prestige: Darling Harbour,  Sydney Opera House, MCG, Seaworld, to name a few.

What are we trying to say when we post where we’ve been?

It could well be the fact that ‘We’re OK’, the visual expression being ‘We’re having fun’, and in the process,  progressing – the way our race is meant to.

In a way, what we are doing is reaffirming to our friends, and ourselves, that despite the world going seemingly crazy, we seem to be OK when we look ourselves over. We’re adapting, we’re surviving and in a way could even be subtly suggesting our suitability as material to propagate the species.

OK, a bit of a stretch, that last part! However, I still strongly believe that what our social behaviour may represent is an emotional ‘check-in’ for ourselves and our friends.

We can compare this behaviour to our body’s natural response after trauma or shock. This is best seen in what we tend do after a car accident. If we have survived it with little or no damage, our first response is to get out of the car and check ourselves over. We often tremble and shake as we do so, touching ourselves over and over again.

Our social behaviour seems similar, and designed to reaffirm our social and emotional well-being our friends and ourselves.

Sport is a priority for us – no surprises there!

We are obsessed with sport, and why not, one has to ask given the recent results we’ve enjoyed in cricket – and before that – the World Cup in Brazil where our team did us really proud.

Winners are grinners, they say, and since we are mostly on the winning side of sport,  it’s no surprise we take it as seriously as politicians take our approval ratings on them!

Our obsession with sport suggests other characteristics too: that we are competitive as a nation, and though we feel fear, we are also both willing and able to confront it, and in the most powerful manner possible.

What the Facebook report and the events of the week suggest?

Even in the midst of tragedy, we will not be overtaken by it.

Aussies are fighters, and ‘what brings us together,’ as an iconic Telstra ad says, says, ‘sets us apart!’

The fact that, as a people, we grieve in unison with the hostages of Martin Place and their families, is more than evident when one visits what has become a shrine to the victims. I was at Martin Place yesterday and was overcome by the impact of the event. Three children will grow up without a mother. One man has lost his partner, and is, as yet, unable to speak to the media about his grief. Scores of others will live with the memory of an incident that will not easily be erased.

Yet, what gives me, and perhaps even all of us, hope are our conversations.

“Love is what binds us together and what makes us what we are – successful and harmonious,  terrorism will not intimidate us, we will not allow it too.” (Malcolm Turnbull).

“Darkness need not overcome light – we must not hate or get caught up in the cycle of recrimination – we must love instead!” (Archbishop Fisher, a lover of hot chocolate and the Lindt Swiss cafe).

2014 has not been easy. It’s been full of tragic events. But the conversations we’ve been having with each other, thankfully, haven’t been one of them.