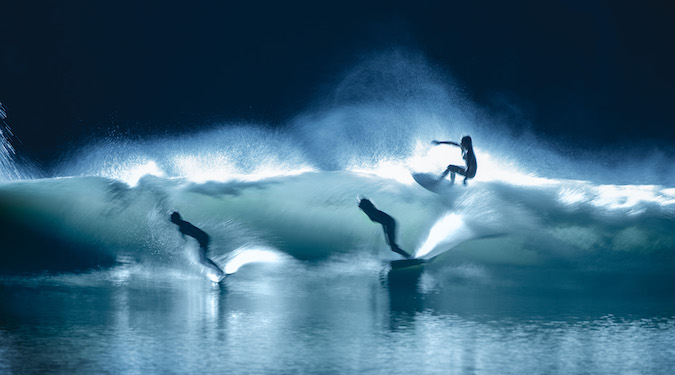 The landmark film explores the possibilities of electric-powered technology and is directed by Australia filmmaker Daniel Askill.

The film was shot in the darkness of night at Kelly Slater’s Surf Ranch in California, where engineering and science has created the longest, rideable open-barrel human-made wave in the world, powered by electricity. This collaboration creates a synergistic link between the future of surfing and the automotive industry and the frontiers of electric technology.

“This electric wave is the future of surfing, paralleling that of the electric car to human progression. The synergies between Audi and Kelly Slater Wave Company present endless possibilities when it comes to electric powered technologies. Our goal was to produce a revolutionary film that was able to showcase innovation across all industries,” says Thomas Glas, head of sports marketing at Audi AG.

Surfers Coco Ho and Leah Dawson also feature in a beautifully choreographed scene that would be exceedingly difficult to capture in nature, due to the unpredictable nature of the ocean. Aska Matsumiya, a Japanese composer and Malibu surfer, composed an original soundtrack for the film.

“I was honoured to work with Audi and Daniel Askill’s vision for this piece. Surfing is competitive, but it’s also an art of expression, and showcasing it through Daniel’s eye is so cool. I’m excited to share this film with the world,” said Stephanie Gilmore.

Audi has integrated in the surfing world by becoming the Official Automotive Partner of the Surf Ranch Kelly Slater Wave Company (KSWC).

Previous Article
Arts and cultural industries appeal for help during COVID-19 crisis
Next Article
To spend or not to spend? Advertising and creative development during COVID-19 and beyond