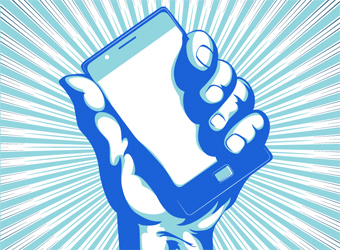 For the first time ever, Google’s Android operating system has taken the number one position for mobile ad traffic, surpassing iOS, according to the Opera Mediaworks’ ‘Q1 2014 State of Mobile Advertising’ report.

Android phones crept up to take the majority market share from the iPhone at the end of 2013, but traditionally iOS as a platform has always captured the most traffic. This no longer appears to be the case, with the Android OS receiving the most traffic (42.8% versus iOS’s 38.2%) – and it is slowly increasing its mobile ad monetisation too, now accounting for over 33% of revenue compared to 26.7% at this time last year.

Among device makers, Samsung came out the clear winner in the Android devices market with more than 60% of impressions, followed by LG, Motorola, HTC and ZTE.

In the United Kingdom, however, iOS is still the leader, capturing 55% of ad impressions and 66.9% of ad revenue. Overall, based on ad requests sent to the Opera Mediaworks platform, iOS devices are 62.3% of UK unique users, with Android at a mere 18.6% and BlackBerry still alive in the market at 14%.

Other highlights from the report’s deep look at the UK market included:

Mobile apps account for 72% of ad impressions, in contrast to the global market where apps comprise just 31% of overall use.

Rich media ads are the most effective

Click-through rates on rich media ads are nearly double those of regular banners, and much of the success is due to the popularity of mobile video ads. About one in seven mobile ads (one in three rich media units) are video, whereas globally they account for one in four.

Campaign data shows that once a consumer engages with a video ad unit, each additional action required to view the ad lowers the completion rate for the video. Sony recently ran a video ad campaign that allowed consumers to get right to the brand’s most compelling content.

Turning attention back to the global stage, in Q4 2013, impression data showed Asia jump in front of Europe as the second largest mobile ad market, after the U.S. This quarter it has strengthened that lead and now accounts for 23% of global impressions compared to Europe’s 13.5%.

« The top six most cringe-worthy tourism ads of all timeOne on one: The road to the holy marketing grail »