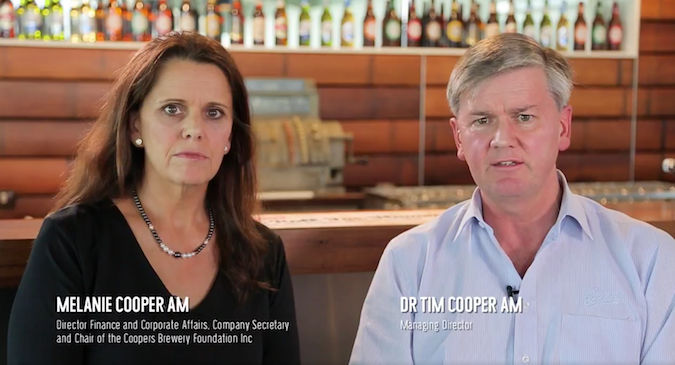 Coopers has released an online video statement in response to the #BoycottCoopers social media campaign.

The brand has also cancelled the release of the Bible Society 200th birthday commemorative cans, which were to feature Bible verses.

In the apology video, Coopers MD Tim Cooper and Melanie Cooper AM, financial and corporate affairs director and chair of the Coopers Brewery foundation, state that the philanthropic brand supports a number of community organisations, and reiterates the brand did not authorise the use of its beer as a sponsor of the ‘Keeping it Light’ video.

“We are incredibly saddened by the impact our involvement with the Bible Society has had on our valued Coopers drinkers and our extended family,” says Tim Cooper.

“Coopers brewery is and always has been supportive of diversity and encourages individualism,” says Melanie Cooper. “Our company supports marriage equality. Offence has been taken for our recent involvement, for which we are deeply sorry. We’ve listened to a number of community views, we acknowledge this feedback and respect everyone’s individual opinions and beliefs,” she continues.

Despite addressing the demands of many #BoycottCoopers social posters, the awkward nature of Melanie and Tim Cooper has led many to criticise the video as “transparent” and not genuine.

@coopersbrewery basically: we retract any and all previous political positions that might cause loss of income to this company.

Bible Society Australia issued a statement on Monday confirming Coopers was not involved in its video:

“Bible Society is entirely responsible for the ‘Keeping it Light’ video. It was not sponsored by Coopers. No money has changed hands between Bible Society and Coopers in regards to this campaign,” it says.

Many on social, however, still believe the connection is too strong to ignore.

If Coopers did not approve the ad, why would host Matt Andrews say “Thank you to the Coopers family” at the end of the ad, @coopersbrewery?

It remains to be seen whether the video will stem the tide of consumers and venues boycotting Coopers products. Many are still deterred by the fact that Coopers is a large and long-standing donor to the SA Liberal Party – another piece of information brought to the attention of the population after the ‘Keeping it Light’ social media storm.