By Kylar Loussikian, assistant editor for business and economy, The Conversation

Several prominent Australian companies could be inflating their adherence to corporate social responsibility guidelines, often filing reports with “partial and missing information”, according to a new report.

The lack of information would make it nearly impossible to verify whether large Australian firms are meeting the social responsibility targets they set themselves.

Analysis undertaken for Catalyst Australia found inconsistencies between how companies ranked their application of widely-used sustainability guidelines and publicly available information used to verify this.

The guidelines ask companies to meet a number of indicators, or justify why they are immaterial. The number met then qualifies the company for a rank of A, B or C. Each indicator needs to be backed up by a publicly available document. 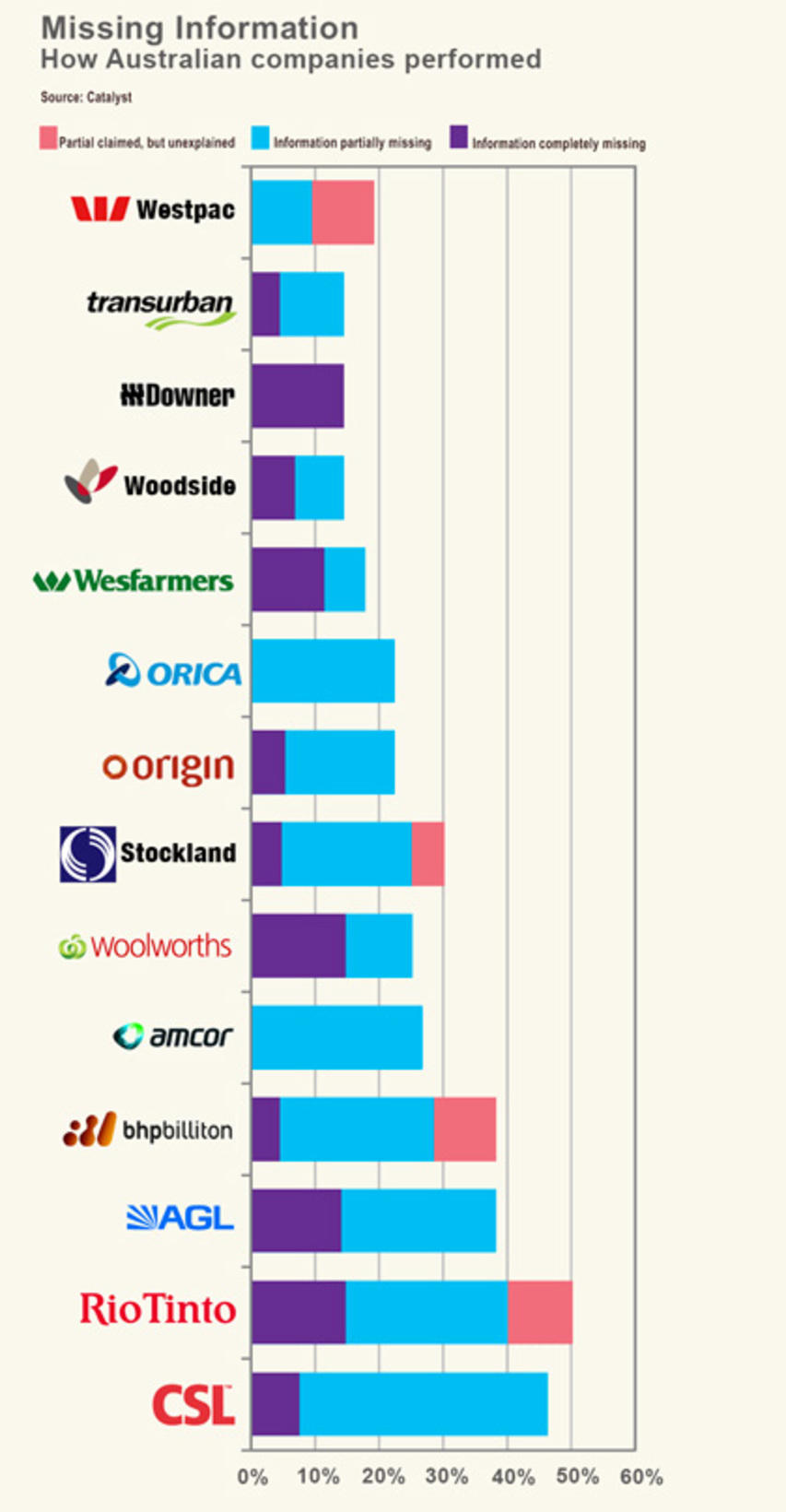 Graphic by The Conversation based on data from Catalyst.

According to the research, mining giant Rio Tinto and biotechnology firm CSL had the most inconsistencies in their reporting, with 50% of Rio Tinto’s report based on information that was either missing or unexplained.

Researcher Jenni Downes says some companies aren’t taking the indicators seriously. “It is a widespread practice to provide generic information where specific information is required,” she said.

“For instance, one indicator may require the publication of a basic ratio of men and women’s salaries by employee category, and while a company may say they are fully reporting, they are often not.”

“In some cases, that indicator is only addressed by a statement that says the company respects pay equality, or that their gender pay gap is below the Australian average. It touches on the topic, but it doesn’t meet the indicator.”

However, Sara Bice, research fellow at the Melbourne School of Government, said companies want sustainability reports to be readable and engaging.

“Companies operating in Australia, for instance, may make a stylistic choice to provide qualitative data for that indicator because the quantitative data may simply be 1:1 and a qualitative statement communicates this better,” she said.

“It might be assumed that gender pay ratios for the same role at the same level within one company are 1:1 due to compliance with Australian equal pay laws.”

“Companies then question whether they need to report items they see as obvious. Businesses are running up against the issue of what is material against what level of reporting they should try to achieve.”

Human rights and stakeholder engagement indicators were the most inconsistently reported across companies surveyed. 70% of companies reporting on the number of “significant suppliers and contractors that have undergone screening on human rights” provided conclusions inconsistent with publicly available information.

Many companies aren’t trying to hide information, Dr Bice said. Instead they may report against certain indicators without fulfilling the quantitative requirements because they are trying to achieve an A level instead of simply reporting against the indicators most material to them.

“I’ve been asked by companies whether they need to respond to human rights indicators. Ideally, these issues would be fully considered, but if you’re Telstra, it’s very unlikely you’ll have child labour issues.”

The report went on to conclude that even external verification didn’t guarantee accuracy. In some cases, including Rio Tinto’s, the checks were conducted by the Global Reporting Initiative themselves.

Downes said the scope of the check was concerning. “It seems in some cases they haven’t looked into the details, and there is an issue with the narrowness of the process.”

“If they checked a random sample of indicators, then they have picked only the ones that are correct. But it is difficult to see how the level of inaccuracy and inconsistency found by our research is possible if the checks were conducted properly.”

Max Baker, an accounting lecturer at the University of Sydney, said this was particularly worrying because it showed assurance providers do not need to check whether claims about being consistent with GRI requirements are accurate.

“The findings are consistent with prior research on the topic which demonstrate that voluntary sustainability reporting is both inconsistent and incomplete and point to the need for mandatory reporting requirements and comprehensive audits,” he said.

Dr Bice says more important questions are raised by the nature of the guidelines. “It’s attempting to provide a global sustainability framework for all types of companies operating in all types of environments, and the one size fits all approach sometimes doesn’t fit.”

She said the GRI never meant for all companies to achieve A ratings and “the choice of this particular nomenclature was ill-considered,” with CEOs seeing an A+ as the best type of report often pushed their sustainability team to aim for these levels, mistaking them for excellence.

Newly released guidelines removed the rankings and encouraged companies to choose which indicators were most relevant for the organisation.