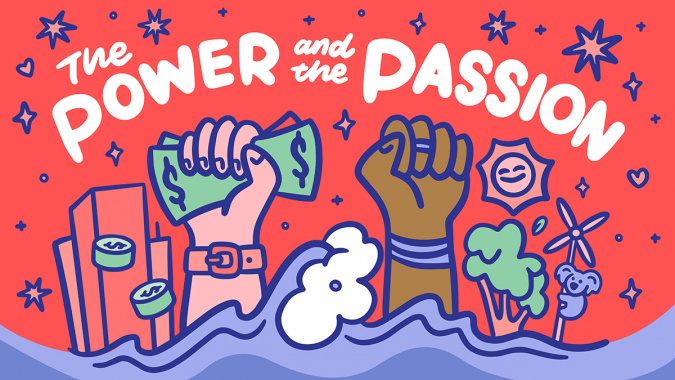 Purpose-driven marketing has emerged as a new way to share values and connect with passionate customers. Ben Peacock writes about which issues Australians most care about most and what power brands really have to make change.

We were sitting with the CEO of a big household goods brand the other day, talking sustainability. He was asking: have things really changed that much in retail? Is it really what my customers want?

Undeniably, the answer is yes.

A new study that the Republic of Everyone has just released surveyed 2,000 Australians across four generations and confirms what social and environmental issues people are most passionate about right now – and where the power lies to make a change.

What are we concerned about?

The results are eye-opening. According to the study, the average level of concern exceeds 70 percent. So much for a carefree living. We are aware that our world is in peril!

The top three issues Australians are most concerned about are the health of our oceans, climate change and plastic waste. That’s right, ahead of COVID-19, climate change is the number one issue that people are troubled by.

Concern cascades by generations. Gen Z is the most concerned. Boomers the least so. Gen Y and X sit in between.

Most of all, people are looking for brands to act. A whopping four in five Aussies across all generations say brands should be supporting causes or changing their products to address social and environmental issues. Three in five actively seek brands and products that do and a majority of us are now prepared to pay more.

Let’s be honest, sustainability and the rise of the purpose-led brand have been a long time coming. It’s easy to forget that companies like The Body Shop have been doing sustainability for a long time now. It became a global powerhouse with three simple words: ‘Against animal testing.’

So why, after so long in the niché, are purpose-led brands suddenly on the rise in such a big way and across all categories?

Here’s what we think.

1. Consumers have had a rude awakening over the past 12 months

COVID-19 has shown how fast the world can be turned upside-down and people are sensing that it’s a dress rehearsal for future crises. If this is what happens when a virus goes global, what will happen once climate change well and truly kicks in?

The pandemic has also shown how fast humanity can find solutions to big issues – if it wants to. People have woken up and realised that with so little government action, for example, the lacklustre response to the issues raised at the Women’s March 4 Justice on the 15th of March, one of the most powerful opportunities to change the world is with their wallet.

Platitudes such as, ‘It’s too hard’ or ‘not yet’, just aren’t going to cut it anymore.

2. Our youngest working generation, Gen Z, is growing up with real-world impacts of major environmental issues such as plastic waste and climate change

Unless you’re a Gen Z, you probably grew up watching David Attenborough documentaries, bursting with nature’s incredible stories. The younger generations, however, have grown up in a world where news about the environment is more likely to be about its destruction.

Why are they so worried? Well, to say the health of our planet is poor would be an understatement. Here are some sobering truths that are too easy to ignore as we plow on with our day-to-day:

It’s not just about floods and heatwaves. Almost every predicted impact of climate change has come true, often before the timeline science said it would. Right now it predicts the failure of everything sometime this century.

In the words of David Attenborough: “If we continue on our current path, we will face the collapse of everything that gives us our security: food production, access to fresh water, habitable ambient temperature and ocean food chains.”

“…If the natural world can no longer support the most basic of our needs, then much of the rest of civilization will quickly break down.”

It kind of makes this year’s sales figures feel a little less important doesn’t it?

Now, a bit of maths. If you’re a Boomer, you’ll probably be pushing daisies by the time this starts to truly take effect. But if you’re Gen Z, it’ll be a lived experience. They could literally be the last generation. Or at least the last generation to enjoy the life we do today.

So how are our young folk holding up under all this grim news? Not well, as you’d expect.

They’re reporting ‘eco-anxiety’. They’re suing their governments and their superannuation funds over climate change inaction. Some are even reconsidering if they can, or should, have children. This is not hyperbole – ask around and, chances are, you’ll hear it from the younger members of your own team.

Is the situation solvable?

Yes, absolutely. If our elected leaders aren’t going to act at the pace we need them to, businesses and consumers must.

The shift is underway. Brands are embracing recycled packaging, organic farming, rethinking where energy comes from, and championing causes that can truly change people’s lives. It’s a coming together of many small – and sometimes large – actions that are moving the needle on what business as usual looks like.

Here are some examples:

When we hear the question, ‘Why would a brand support sustainability in the development of their product, or its sale?’ Our answer is, ‘Why wouldn’t they?’

If you still need convincing that purpose-driven business is what consumers really want, perhaps it’s time to realise that it’s not about you anymore, but about the future. After all, as a wise person once said, “We do not inherit the earth from our ancestors, we borrow it from our children.”

So let’s give them what they want, even if they aren’t your customers now, they won’t be in the future unless you do.

Ben Peacock is the founder of the Republic of Everyone.

Tags:
Previous Article
How to boost customer confidence in an online world
Next Article
Will influencers become the new key client that agencies are fighting for?