Are inclusive campaigns the way to make sales?

Are inclusive campaigns the way to make sales?

It’s been a hot topic for a while now, consumers demanding more inclusive campaigns. From plus size, to genders, race, ability, consumers want to feel like they’re being represented about by a brand. Is this converting to sales?

Since the start of glossy magazines there have also been glossy ads. Beautiful people with almost unattainable bodies, clear skin, white sparkling teeth. With photoshop becoming a standard affair in advertising, we weren’t just being sold products but something else. An impossible standard of beauty.

Not only were the campaigns photoshopping out flaws, but there was also another commonality. Campaigns were full of thin, white, able bodied, young people. Detailed in Netflix’s White Hot, this was championed by brands such as Abercrombie & Fitch and Victoria’s Secret.

As social media took over, advertising became a big part of the experience. Influencers were paid to sell us products. Enter: the filter. The filter has become ingrained within our social culture. Filtered images are common practice, users across the world flick a filter on when using Instagram. And the filters aren’t just common but they’re hard to notice. More than ever, poreless skin and light makeup filters are so subtle that it’s hard to distinguish. What you can’t distinguish as a filter tricks users into thinking that this is real. If it’s not in a magazine surely this is real life?

Except that it isn’t. And it’s damaging our perceptions of what’s real and what’s a filtered world.

In a world of filters, something else started filtering through. People were getting tired of the same aesthetic. And, a revolution of sorts started.

It started on Instagram. Influencers started to do away with the filters. Many influencers promised to stop using them in Instagram stories, and others stopped editing their in-feed posts. And, from here, campaigns followed suit.

What was once dominated by models, fashion and lifestyle campaigns have started to feature what is referred to as “real” people. That is, people beyond the boundaries of what we were used to seeing. Same sex couples were featured in lottery ads, “plus sized” people were seen in underwear ads. A lineup of models were no longer all tall, thin and white. Campaigns were featuring people of many races, many body shapes and different ages. More companies began to see this as an emerging trend, and started to employ this strategy. Less filters, less stereotypes, more real people that consumers see as representing themselves.

Inclusive campaigns have seen a monumental uptick. Victoria’s Secret runway show has been ditched as people condemned the unrealistic body types, and lack of diversity. The company was under public scrutiny, and as the curtain closed for a final time on the blockbuster show, the shift to inclusivity had been made. And, as it turns out, it’s one that can convert into sales.

Australian influencer Abbie Chatfield recently released her own capsule collection fashion brand under the name Verbose the Label. The campaign was praised for its inclusivity. Not only did the images feature a range of sizes, the label itself runs from an Australian size 6 through to 26. The label has been a sellout success met with praise.

Fashion giant ASOS has been praised for inclusive models, from those with acne to not photoshopping out birthmarks and stretch marks. Beauty care company Sol de Janiero’s latest OOH campaign features bodies of all sizes; and it’s working. As the brand sells out online, the campaign is making viral success online, gaining more brand exposure. 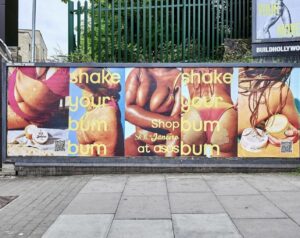 On the reverse of the inclusive campaigns, those who aren’t changing tactics are feeling the sting. Another Australian influencer released an activewear line late last year and was met with public scrutiny. The campaign featured a plethora of young, white, thin influencers. The line wasn’t commercially successful.

This week, global ad agency Ogilvy announced that it will no longer be working with influencers who edit or filter their images. An announcement like this is a huge move for the industry. As some countries make it illegal for influencers to use filters in paid posts, other businesses are rejecting any editing in the final campaign shots.

The future for inclusivity is bright. And it’s worth its weight. Consumers are becoming more aware of over editing. And, they don’t want to see it. Consumers are positively reacting to campaigns that they feel represented in.

Inclusivity was once a buzzword, but today, it’s the way of the future.