The newly wedded Kourtney Kardashian and Travis Barker have made headlines again. But this time, it’s for the raunchy campaign for US based vegan brand Daring. And, the creative is, well, daring indeed.

Wearing a (perhaps rather ironically) snakeskin corset, Kardashian is fed the plant-based chicken by her new husband. It’s a campaign that is certainly scroll stopping, as if it’s a shoot that was meant for the boudoir rather than a paid social campaign. But, it’s doing its job.

In one particular shot, the newly betrothed are on a hotel bed. Kardashian is in, well, lingerie. Barker lies across the bed and Kardashian perches delicately on top of him. The couple are surrounded by plant-based food; from fried to grilled chicken to salads and fruits.

The colourful shoot is certainly a message to the masses; vegan is officially cool.

Barker hasn’t eaten meat sincere was 13, and Kardashian has been a prominent figure in the wellness industry for some time.

So, as the options for those living a plant-based lifestyle increase, the foray into mainstream is well and truly here. With two of the biggest stars in the world right now getting down (and dirty) with the meat alternatives. 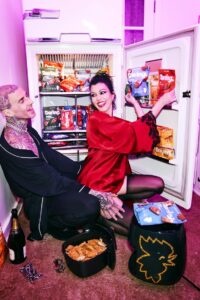 Previous Article
When the ads don’t work: Why publishers are embracing content partnerships
Next Article
It’s official: Australians are unhappy

Menulog have recruited Wendell Sailor for State of Origin